Children's Book Day is celebrated in libraries on April 30 each year to celebrate multi-cultural children's literature. Started by award-winning author Pat Mora in 1996 "Día" celebrates the joy of reading. This year in honor of Children's Book Day students in my Spanish 101 class helped to create a Library Guide that showcases some of the bilingual Children's Books in the Maxwell Library. The Guide can be found here.

In Pat Mora's honor this year on "Día" I read her book Gracias/Thanks. This bilingual book is the story of a boy who tells readers all he is thankful for, including his friend Billy who showed him

Wonderfully illustrated by John Parra this book is a 2010 Pura Belpre Honor Book.

Posted by YearofBooks at 1:06 PM No comments: 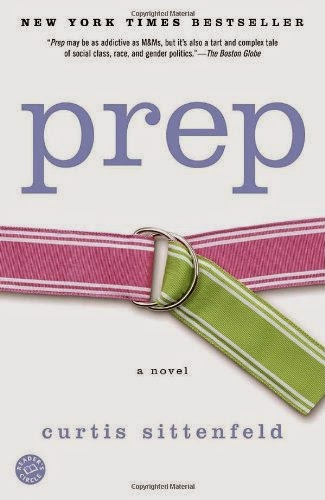 The discomfort I felt reading this boarding-school book was different from what I felt reading the likes of Testimony, or Looking for Alaska. It wasn't so much the risky behavior but rather the way that I could imagine my own daughter would relate to so many of the other experiences that our protagonist Lee Fiora has as a middle-class scholarship kid at an expensive New England prep school. I cringed (and laughed) when Lee explains how she learned not to open her family's care packages in front of any of her classmates when she found three packages of Kotex inside one of them, along with a note from her mother that "Kroger's was having a sale".  It was actually eerie how many things I read that I knew to parallel my daughter's experiences. As I read farther in the book my discomfort shifted inward when I realized how much I identified with Lee. Although I attended my local public schools for 12 years there are some teen experiences that are universal. Lee's constant over thinking, second guessing, and feeling that she didn't belong, and wasn't good enough probably were consistent with the experiences of most who read this novel. The sex scenes were disturbing in that the consent was so passive. Although her suitor did explicitly ask and Lee provided verbal yes, it was clear that she so desperate for the attention of the boy she had a crush on that she allowed him into her bed knowing that he did not love her, and that their relationship would never be anything except sex.

Sittenfeld is vague as to the timing of the novel. We can guess from some hints that it was probably the early 1990s. For instance "e-mail technically existed, but no one had it." Likewise no one had a cell phone, but rather shared a pay phone in a common area of the dorm. Some students had computers, but the library still had a card catalog. Like my daughter, going to boarding school was Lee's own idea. Unlike my daughter, Lee researched the schools at her local public library and sent away for catalogs, whereas my own child did all of her research online and simply sent us links.

Lee's time at the Ault School ends rather inauspiciously when she is interviewed by a reporter for the New York Times about her experience at the school. The article is published with the school looking less favorable than the administrators and trustees would have hoped. Lee informs the readers that she "aired the school's dirty laundry and there was proof". One only needs to go to a library and "find the microfiche from the month and year [she] graduated." Again, we don't know exactly when that would have been.

I marked a lot of places in this novel where the school library is mentioned, but there really is no action that takes place there. Lee meets people there, and passes by it a lot, and sometimes goes there to study. Like the dorms, and the dining hall, the library is part of the larger setting - what you might expect to find at a New England boarding school.
Posted by YearofBooks at 10:01 AM No comments:

Wild About Books - by Judy Sierra 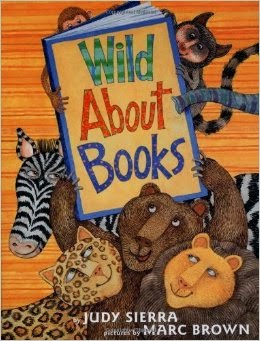 In honor of  National Bookmobile Day I read Wild About Books about "Springfield librarian Molly McGrew [who] by mistake drove her bookmobile into the zoo" (there are a lot of rhymes in this book). She has books for all the animals and instills in them a love of reading. So much so, in fact, that the animals ultimately build their own branch library right at the zoo!

Posted by YearofBooks at 8:02 AM No comments:

In honor of National Library Worker's Day I read a book about a librarian. While this book ultimately is about breaking librarian stereotypes, it takes a long time to get there. Miss Lotta Scales is a dragon librarian (literally) at Sunrise Elementary School who won't let children touch any books lest they get them grimy or snotty. Plus, she partakes in the cardinal sin of librarians and actually burns books!


Books that depict cruelty to dragons should never have been published in the first place.

She got so fired up about this, she didn't just discard the books she didn't like, she incinerated [emphasis in original] them.

It is one of the students at the school who ultimately gets her to change her ways. The dragon drops her scales, and stops breathing fire to become a librarian who aims to connect books with their readers, just as Ranganathan would have wanted.

Posted by YearofBooks at 4:57 AM No comments: A favorite author among young people for over 40 years, Judy Blume is this year's Honorary Chair for National Library Week (April 13-19, 2014). The beloved author is not only a life-long library user, and advocate for libraries, she is crusader against censorship. This isn't surprising, as her books are perennials on the list of Most Frequently Challenged books. Her best-selling novel for young adults Are You There God? It's Me, Margaret was targeted almost immediately upon its publication. It seemed fitting that I read Blume's biography for Young Adults in honor of National Library Week. Evidence of her love of libraries can be found throughout. As well it is easy to see where her battle against book banning began

Not everybody liked Margaret Judy gave three copies of the book tor Randy's and Larry's [Blume's children] elementary school, but they never appeared on the library shelf. The principal wouldn't allow them because the book dealt with menstruation. Schools in other cities also banned the book. "I was angry beyond words" says Judy.

This reaction was a steep contrast to the reception her first book, The One in the Middle is a Green Kangaroo, received. "She sent a copy of the book to Randy's third grade class, and Randy's classmates sent Judy cards telling her how much they enjoyed it. 'I felt like a celebrity,' Judy remembers."

The Book Thief - by Markus Zusak 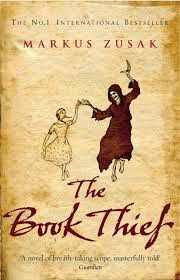 There is some irony in the fact that my library's copy of The Book Thief has been overdue since December. I strongly suspect it is not coming back - at least not any time soon. I had put myself on the waiting list for the book before Christmas, but after the book failed to be returned in any kind of a timely fashion, I got a message that my "hold" request had expired. I ended up buying a copy for my iPad, which turned out to be pretty cheap. I think it was under $5.

It is, of course, right and good to read a book before you see the movie upon which it is based. The Book Thief movie came out in theaters in November, but I did not see it, having not yet read the novel. The movie will be released on Netflix tomorrow, which I do look forward to seeing, now that I have done my due diligence.

This is the story of a girl named Liesel. Liesel lives in Germany, under the Nazi regime, with her foster parents and a Jew (Max) who lives under the basement staircase. Liesel is the eponymous "book thief". Her first theft being almost an accident, the rest were rather deliberate. Her second theft came during one of the Nazi book burnings


The Germans loved to burn things. Shops, synagogues, Reichstags, houses, personal items, slain people, and of course books. They enjoyed a good book burning, all right - which gave people who were partial to books the opportunity to get their hands on certain publications that they otherwise wouldn't have.

Most of the rest of the thefts are from the personal library of the mayor's wife, Ilsa Hermann. But once the Frau Hermann figured out what was happening, she played along by leaving books out, and making it easy for Liesel to enter her home to browse the shelves.

The importance of books to Liesel is evident to all. Her foster father, "Papa", teaches her to read and write and then, knowing how much the printed word means to his young charge threatens to burn all her books if she tells the family secret - the one literally hidden away in the basement. Max knows how much the books means to her when he writes a book for her using pages from Mein Kampf that he paints over to make fresh writing surfaces.

The books Liesel steals become not only her salvation, but the salvation of others as well. When those in her neighborhood were sent to bomb shelters with only their most important possessions in tow, Liesel took a book, and read to everyone.


For at least twenty minutes, she handed out the story. The youngest kids were soothed by her voice, and everyone else saw visions of the whistler running from the crime scene. Liesel did not. The book thief saw only the mechanics of the words - their bodies stranded on the paper, beaten down for her to walk on. Somewhere, too, in the gaps between a period and the next capital letter, there was also Max. She remembered reading to him when he was sick. Is he in the basement? she wondered. Or is he stealing a glimpse of the sky again.

Ultimately, it is a book that literally saves Liesel's life. Hidden in the basement, where Max once stayed, she is reading the book he left for her when her town is leveled.

Only one person survived.
She survived because she was sitting in a basement reading through the story of her own life, checking for mistakes...The shells of wreckage cantered down, and hours later, when the strange, unkempt silence settled itself on Molching, the local LSE  could hear something. An echo. Down there, somewhere, a girl was hammering a paint can with a pencil...

She was still clutching the book.
She was holding desperately on to the words who had saved her life.

I notice upon a second reading of this passage that the author chose the word "who" rather than "which" in this last sentence, giving an anthropomorphic quality to the book. It was the book "who" saved her, as much as the soldiers who removed the rock to release her.

Posted by YearofBooks at 11:30 AM No comments: