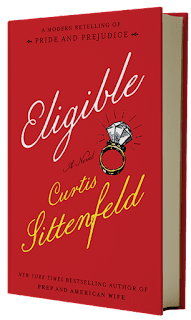 The cover tells us that this is "A Modern Retelling of Pride and Prejudice". Like so many others, I read Austen's P&P in college. Not only that, but I wrote my own "modern retelling" of the tale for a writing assignment. I don't remember the novel very well, nor much of what I wrote in my own version; however, I do recall writing about some "scandalous" affair involving a teen pregnancy and a hasty marriage (based on the true woeful tale of a girl in my high school, and her catholic-school boyfriend). Like Austen's novel this one revolves around a gold-digging mother (well, let's call her "upwardly mobile") wanting to marry off her five daughters.

Eligible is written by someone with a lot more writing experience than I had as a college freshman. She also has a lot more material to work with in the 21st century than I would have even known to consider in 1986. This is to say that Sittenfeld's has written a richer and funnier story than I did, with more interesting characters.

Sittenfeld's classic biting critique of modern life is as evident in this as it is in her other works. And also like her other works, the library is part of the scene, but doesn't necessarily play a role. The favorite daughter, Liz, works for a women's magazine. Her first job in publishing had been as a fact-checker for a prestigious magazine, where she first met her (married) boyfriend, Jasper.


They had started their job using computers with spotty Internet connections, back when fact-checking  meant visiting the public library or waiting anxiously for the return of phone calls.

Mr. Bennet frequents Cincinnati's Mercantile Library to do research and explore the genealogy of his family. And Liz uses the public library to check out an audio book she hopes will keep her parents occupied on a long car drive.

One need not have read the original Pride and Prejudice to enjoy this wicked version. Fans of the Austen's work will find all the expected characters including Mr. Bingley (here a reality television star) and Mr. Darcy (a surgeon). An excellent summer read. I will have to revisit the original now.

Posted by YearofBooks at 10:28 AM No comments:

The Library - by Sarah Stewart 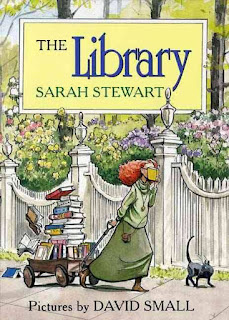 A story in rhyme accompanied by beautiful illustrations tells the tale of Elizabeth Brown, book hoarder. I know some bibliophiles don't think you can have too many books, but they are wrong. One should have just enough books. Books are meant to be read, having them stacked all around prevents them from being used to their fullest potential, and makes them especially difficult to share. If people who have a lot of books want more books they should go to the library. This allows them to read more books without accumulating them.

I am happy to report that in The Library Ms. Brown ultimately does the right thing with all her books.

Posted by YearofBooks at 6:56 AM No comments:

If you are not yet aware of the television series Riverdale (a noir adaptation of The Archies cartoon series) I highly recommend it (currently available on Netflix streaming). Archie, Veronica, Betty, Jughead, Moose and the rest of the gang (with the sad exception of Sabrina, the Teenage Witch) show us the dark underbelly of the town that '70s kids wished they lived in. It isn't all fun and games just hanging out at Pop's Chock'lit Shoppe and making fun of Miss Grundy and Principal Weatherbee, for Riverdale's wholesome facade masks murder, mayhem, and mobsters.

As much as this show attempts to destroy some stereotypes, others just don't seem to die. The uptight librarian who helps Jughead check out some books about serial killers not only looks the part as she stands behind a sign reading "Shhhhh...Quiet please" she actually gets rather judgmental, questioning Jughead's reading choices. Real librarians would never stand for such behavior. 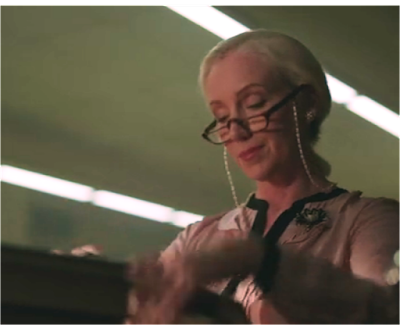 This episode also features Betty returning with Jughead (her lover!) to the same library to check out a book on Nancy Drew ciphers when she receives a coded message from the Black Hood - Riverdale's own "Jack the Ripper".

Not convinced yet to watch this? Well, let me say this:
Luke Perry as Archie's father
Molly Ringwald as Archie's mother
And just wait until you hear Josie and Veronica sing Schoolhouse Rock's "Sufferin' till Sufferage". Late Baby Boomers, Gen Xers - I'm talking to you.

Posted by YearofBooks at 3:39 PM No comments:

A Time to Fall - by Jess Vonn 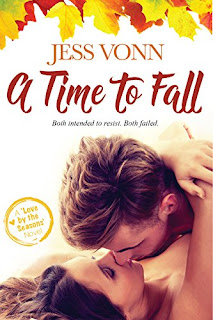 The last time I wrote a post about a romance novel (A Knight to Remember), I prefaced it with this statement "I don't always read romances, but when I do they are about librarians". So now I must make an amendment: I will also read romances authored by those on whose tenure committee I served. And, as Vonn's book also clears my low bar (of mentioning a library at least one time) for inclusion on this blog, it gets a review here, too.

Fleeing from a bad break up,  Winnie Briggs leaves Chicago and moves to Bloomsburo to take a job as editor of the local newspaper The Bloom. After literally running into her landlady's most dapper son, Cal Spencer, Winnie attempts to keep her distance from him so she can focus on herself. Cal, likewise, had no interest in falling for his mother's quirky new tenant. Sexual hijinx ensue.

Winnie is intelligent and dedicated to her work. So much so that on a Sunday night at 11:00, she was writing a tedious story about a county planning and zoning commission meeting even though "her brain hurt and she wanted to curl up in bed and read the latest Julia Quinn novel she just picked up from the library."

For those of us who pay attention to such things as how libraries are presented in works of fiction, this one actually packs some punch. After all, this wasn't just any Sunday night: this was the Sunday just one week after Winnie Briggs arrived in town. So what we learn from this is that Winnie Briggs is not simply "kind and smart and funny and lovable as hell" as well as "sexy...and competent". Winnie Briggs is also a person who knows that one of the first things a person does when they move to a new place is to get a library card. And really, there is nothing hotter than that.

Posted by YearofBooks at 10:26 AM No comments:

Julie of the Wolves - by Jean Craighead George 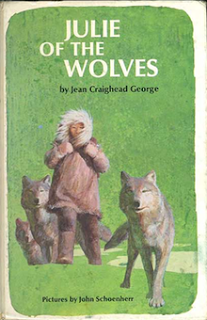 Sometimes you find libraries in the most unexpected places. I had never read this Newberry-award winning book, although I had heard a lot about it, and I remembered my sister reading it back in the '70s. She told me, as the title suggests, that it was about a girl who lived among the wolves in the Arctic Circle. I didn't expect to find any libraries in this book, but what I didn't realize was that Julie (aka Miyax) didn't always live with the wolves. Before running away she had lived with her father, then her aunt, and then was married at age 13. She attended a mission school, and used the mission library in Barrow, Alaska where she read letters from her pen pal (Amy) who lived in San Francisco. After leaving her husband's family Miyax had planned to visit Amy but lost her way. In finding the wolves she discovers herself, and her own strength.

I picked this book as my July read (a book set in a cold climate) for the Baltimore County Public Library #BWellRead challenge.

Posted by YearofBooks at 6:20 AM No comments: