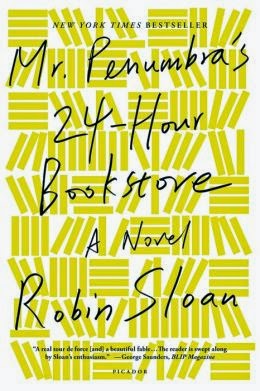 Clay Jannon, recently laid off from his work as a web designer, takes a job in an unusual bookstore. Working the third shift, when his few customers are borrowing books (rather than buying them) from what he calls the "Waybacklist" (located in the the back of the store) Clay is intrigued by his eccentric clientele. The Waybacklist is three stories high, with the highest shelves accessible by a very tall ladder and Clay gets the job by demonstrating that he is good at climbing, and is not afraid to reach. Clay is also required to describe each of his customers in a log book, explaining their demeanor and what they were wearing on each visit. The books they borrow are written in a cryptic code, and customers always seem to have a sense of urgency about them.

Clay's boredom at work drives him to use his computer skills to create a digital model of the store, and he discovers that there is a pattern to the book requests. In what becomes a bibliophile's National Treasure  Clay and his band of geeky friends attempt to help Mr. Penumbra to find the key to the secret of eternal life. Their quest takes them from Penumbra's quirky storefront in San Francisco, to New York City, to a warehouse in Nevada.

New York City is where the secret library of the Unbroken Spine is housed. Volumes in this library are "encrypted, copied, and shelved...[and] not read by anyone until after [the author's] death." All those who have written books for the library of the Unbroken Spine are hoping that one day the codex vitae will be unlocked, and they will thus be rewarded with immortality. Penumbra explains to Clay


The nature of immortality is a mystery...But everything I know of writing and reading tells me that this is true. I have felt it in these shelves and others.

Although skeptical Clay admits that he is familiar with


the feeling Penumbra is talking about. Walking the stacks in a library, dragging your fingers across the spines - it's hard not to feel the presence of sleeping spirits. That's just a feeling, not a fact...

Thousands of computers are used in an attempt to crack the codex, which ultimately requires a decidedly much more low-tech technique.

The answer turns out to be about as satisfying as Douglas Adams' 42 - the answer to "life the universe and everything".

A final note to those who decide to read this book, no need to Google Gertizoon font, or Dragon-Song Chronicles. I already did so. They were invented for this story.
Posted by YearofBooks at 11:51 AM