I'll Take You There - by Wally Lamb 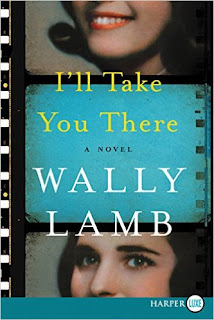 Film professor Felix runs a club that screens classic movies in an old vaudeville theater. It is there that he meets the ghost of movie director Lois Weber. Weber informs Felix that he is being given a special opportunity to watch movies featuring his younger self, and that he would also be able to enter and be part of the films. Episodes focus on the summer before he (Felix) begins first grade when he and his older sisters are excited about helping their former babysitter win the Miss Rheingold title; and the year his twelve-year old self watched as his sister Frances (aka Fran) developed anorexia and a family secret was revealed.

There wasn't much about libraries in this one, but it doesn't take much to make the cut on my blog. I was optimistic at first that there would be some good library stuff when I read that Felix's daughter's boyfriend, Jason, was a New York University Special Collections librarian, but he barely makes any appearance in the work beyond the first mention early in the story. The Miss Rheingold contest is brought up in several contexts in the book, and one is that of a lonely newlywed bride,Verna, ripping an entry form from a magazine she reads at the New London public library (she "looked over at the desk to make sure the librarian was busy" first).Verna also found solace at the library during her long solitary days as the wife of a Merchant Marine. And on a final note about libraries, Felix's daughter, Aliza, writes an open blog post to her mother, Kat, and in something I will dub Gen Y-splaining, reminds her mother that young women in the 1950s had few career options. These included "mother, teacher, nurse, secretary, librarian, fashion model". Furthermore she says Aunt Fran (who eventually became a denist) didn't want to be any of those things. She probably just didn't realize how fun being a librarian could be. I imagine she saw the job as just stamping out books.
Posted by YearofBooks at 11:53 AM