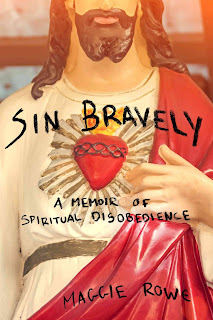 Of the spiritual memoirs I've read most recently (see my posts for Post Traumatic Church Syndrome and A Year of Living Prayerfully ) Rowe's work was, without a doubt, the most raw. The author tells the story of how her doubts of being saved, despite the fact that she had been baptized, and had, on countless occasions, publicly professed Jesus Christ as her lord and savoir eventually consumed her. As a young college woman in the 1990s this lifetime of confusion catches up with her. The overwhelming feeling that she was not doing enough to demonstrate her Christianity (a condition she discovers has a name - scrupulosity) lead her to check in at Grace Point, a psychiatric hospital "where the Bible comes first". The book details her time at Grace Point and incorporates flashbacks of her life prior to the panic attack that ultimately motivated her to seek help there.

Rowe made good use of her college library. She not only used the viewing room to watch BBC productions of Shakespeare plays for class with her boyfriend she also attacked her "theological demons" there by reading what "theologians and the early church fathers had written about salvation and hell". She specifically mentions drawing a "trench line in a remote corner of the Cornell library, between Dewey decimals 220 and 230". While I don't doubt she did the research, I do question that Cornell University Library used the Dewey Decimal System to classify its books. The Library of Congress system is most commonly used in research libraries and so it appears that Cornell does, at least currently, follow this custom. Perhaps things were different in the 1990s, but that is unlikely. I expect Rowe took a bit of artistic license here.

Rowe worried a lot about the eternal fates of the many good people she knew who were not Christians, including the "Asian librarian with the Buddhist yin-yang symbol around her neck who didn't charge [her] a late fee for [her] overdue books". She needn't have concerned herself, though - all librarians go to heaven! The destiny of those who return library books late, however, is another matter.

Posted by YearofBooks at 6:49 AM