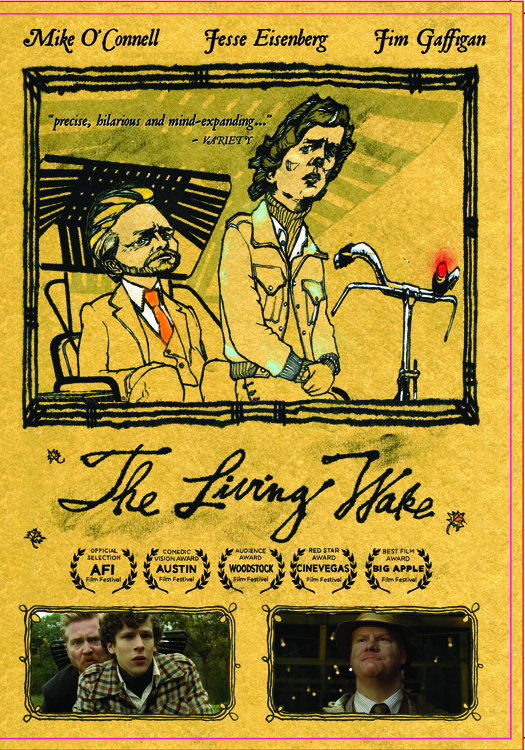 My husband has a habit of looking up movies (as we're watching them) on The Internet Movie Database (imdb.com) and telling me what other venues the actors and actresses have played in. Earlier this year while we were viewing season two of The Handmaid's Tale on hulu he informed me that Ann Dowd (Aunt Lydia) played a librarian in a film called The Living Wake, at which point I immediately added it to my Netflix list. I'd forgotten all about this conversation until last night when we watched said film and the library scene came on. James looked up The Living Wake on imdb and asked if I knew who the librarian was. I said she looked familiar, but couldn't place her and when he told me she was Aunt Lydia, our previous conversation came back to me and the entire episode came full circle.

The premise of this film is that self-proclaimed genius K. Roth Binew (Mike O'Connell) discovers that he has some dreaded, as yet unnamed, disease and has been told of the exact date and time of his death. In his final day he plans his own wake and invites a band of rather eccentric people to join him for his last performance. He is aided in this endeavor by his sidekick Mills (Jesse Eisenberg) who employs a rickshaw to transport K. Roth to his various destinations. One of these is the public library where K. Roth attempts to donate the five (unpublished) books he has authored. He is thwarted by the nameless librarian, a shushing bunhead, who informs him that she cannot accept donations. She explains that there is a process and that all books must be approved by the board. She, as a mere know-nothing librarian, has no authority to choose books. Furthermore, she says, that the public cannot be trusted to select its own materials otherwise "this place would be brimming with pornography and gun magazines". And although K. Roth admonishes her to "flex your muscle and abuse your power" she shuns his advice reminding him that "the rules are the rules".

This film is not so much sentimental as it is irreverent. It will likely appeal to those who liked Moulin Rouge! or Big Fish. It is a must-see for those who are interested in librarian films, but be aware that those looking for a film that passes the Bechdel Test will not find it here.

Posted by YearofBooks at 1:30 PM

Email ThisBlogThis!Share to TwitterShare to FacebookShare to Pinterest
Labels: librarians on film, stereotype