Her Mother's Daughter - by Marilyn French 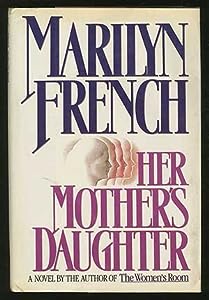 "A novel by the author of The Women's Room" says the cover of the book. When I learned the term "feminist literature" in college it was because of Marilyn French. I actually read The Women's Room, the whole thing, when it was assigned to me in my Literature and Social Change course 25 years ago. I was stunned during a small group discussion in class to learn that one in my group (a man) admitted to not having read the whole thing. This, of course, did not stop him from providing us all with his opinions of the work.

Anyway, when I saw this on a free book exchange shelf I knew it would be a good thing for me to read during my time off over the holidays.

The novel follows four generations of women from the turn of the 20th century, through the depression and into the tumultuous '60s and '70s. The mother-daughter relationships throughout the decades are always complicated, and aggravated by the fact that they are living in a man's world.

Whip-smart Anatasia discovers solace in books, and the small library in the back of her elementary school classroom, as well as her local public library where books on art and photography pique her interest. As an adult Anastasia finds her dream job as a photographer for World magazine. She describes preparing for her interview


I had enough wits about me to set the interview a week away. This gave me time to go through all my drawers, considering. I rejected all those pictures of angry or dismayed mothers; and most of those that were interesting, odd close ups of unusual objects like a stack of sewer pipes or a train wheel, or the inside of an iris. All baby pictures were taboo. I ended with a set showing men working, machines, and a few splendid landscapes. After all, I knew what World liked. I saw it every week in the Herald waiting room. It was the best picture magazine-and the best paying-in the world. At the time, I regret to say, I did not think about all the concealed censorship; about how, if you want to get ahead in the wold, you take your cue from what is established, and shoot the things the establishment enjoys seeing, and avoid those it does not. I did not think about the ways we are taught, outside the church and the schoolroom, what to value, or about my being manipulated by the power world. I just wasn't thinking; I wasn't a political person...I didn't even think about how I automatically knew what photographs to include, or the meaning behind the choice of what to exclude.

As we close the second decade of the 21st century self-censorship is still an issue. I think the difference now is that artists and authors are aware that they are doing it. Concern over what will sell, or what our bosses will like continues to drive so much of our decision-making.

Also still alive and well is the practice of men participating in book discussions about books they freely admit to not having read, as evidenced by an (entirely optional) gathering I attended just last weekend.

Posted by YearofBooks at 5:47 AM