I had grand plans to read each of the "top ten" banned books for 2011 in preparation for Banned Books Week, but as it turns out I only read one: Alice in Rapture, Sort of from the Alice series by Phyllis Reynolds Naylor. The series comes in at number 6 on the list. I had, however, previously read some of the other books on the list: ttfn by Lauren Myracle; The Hunger Games trilogy by Suzanne Collins; and To Kill a Mockingbird by Harper Lee. For a complete list see below.

Alice in Rapture, Sort of
There are over 20 books in the Alice series, and I only read one of them. I think the challenges must come from some of the later books in the series, as Alice gets older in each one. Rapture takes place during the summer between sixth and seventh grades (a.k.a. "the summer of the first boyfriend") - some french kissing going on, but not much else, at least for Alice and her friends. Her brother, Lester, does have to answer to their father for "entertaining" a young woman in his (the father's) bedroom. As for "nudity" there was one scene in which a bathing suit top came off; no language that I can imagine anyone calling offensive (unless you count "heck") and some talk about "big boobs". I am not sure what the "religious viewpoint" is. One of Alice's friends, Elizabeth, is Catholic and there is some questioning about what is considered a sin and what is not. 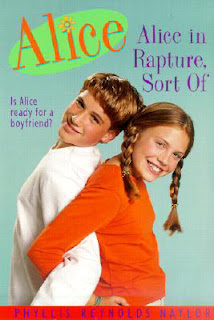 Libraries don't play much of a role, although they are mentioned on two consecutive pages, in unrelated passages. Alice's father suggests she go to the library to learn about child care when she is hired for her first babysitting job, and Alice recalls the multitude of rules she had in elementary school including

what entrance you used in the morning, what door you used going home, when you could talk in the library, how many paper towels you could use in the rest room, and how many drinks of water you could get during recess.

This book was especially fun for me to read because it takes place in Maryland (my home state). References to the Baltimore Orioles, High's Dairy stores, and Ocean City invoked some strong nostalgia in this accidental Bay Stater.

Posted by YearofBooks at 8:30 AM