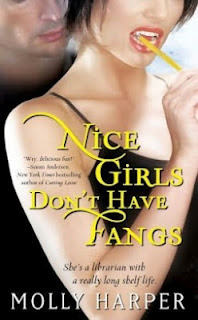 I am fascinated by vampire legends, lore and stories. I have visited Dracula's boyhood home in Transylvania, and have taken the vampire tour of New Orleans. I am a bit embarrassed to admit how much I like Stephenie Meyer's Twilight series of vampire books. I read all four of them in less than a month, and while I will say that I thought the fourth one left a bit to be desired, overall, I really enjoyed reading them. I found them thrilling and sexy. I also watch a lot of vampire movies, my favorite is Transylvania Twist, not because it is is an exceptionally great movie, in fact, it is pretty goofy, but because it features both vampires, and librarians. For this same reason, I couldn't resist reading Harper's romance/fantasy about a vampire librarian. In the world created for this series the dead and undead co-exist in the land of Half-Moon Hollow, Kentucky. Our protagonist, Jane, is a newly "turned" vampire, and unemployed children's librarian who shares the family home with the ghost of her great aunt Jettie. This work did not pique my interest as much as I expected it to. While the consummation of Jane and Gillbert's relationship only took place after several frustrating encounters, the sexual tension wasn't built up in a way that made me care one way or the other if sex ever happened. And, while this was not the first book I read to feature sex in the library, it is the first that made it out to be so unsatisfying.

Dave Chandler left me on the ninth floor of our university's research library without my panties after we lost our virginity together. He never called me again and actually turned on his heel  and walked in the opposite direction whenever he saw me on campus...Dave and I were both student library workers...It turned out that while the Russian folklore section offered plenty of privacy...the shelves left really weird bruises on your back.

I also grew weary of the one-dimensional characters - the obnoxious sister; the overbearing mother; the nasty supervisor librarian, among others.

It was a quick read, and I believe it may have been the first book I blogged about here to actually mention Banned Books Week (which coincidently was when I read it), and while I did not dislike it, I did not find it engaging enough to read the rest of the series.
Posted by YearofBooks at 12:38 PM