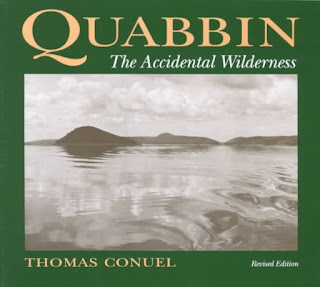 In 1946 the Massachusetts towns of Dana, Enfield, Greenwich, and Prescott, along with six villages were flooded to create the Quabbin Resevoir in order to provide fresh water to Boston. The inhabitants of the towns were relocated, as were cemeteries and some buildings.

Conuel's book tells some of the history of the towns and how the reservoir was created, and also tells of the beautiful wilderness that stands today with wildlife including bobcats and bald eagles. This slim work is rife with historic photographs providing a glimpse into the life of central Massachusetts at the turn of the 20th century as well as pictures of flora and fauna found at the Quabbin Resevoir. The book was first published in 1981, and I imagine that even since the 1990 revision I read climate change has brought about some additional transformations to the area.

One cannot write a book such as this without some assistance from archivists, historical societies, and librarians. Conuel found a gold-mine of information in Warren "Bud" Doubleday, a former resident of one of the flooded towns. He was referred to Doubleday by a librarian in New Salem. He also acknowledges Audrey Druckert, the official librarian of the historical society, an expert in wild plants and conservator of "a collection of tapes...as close to a complete oral history of the valley before the reservoir was built as exists anywhere."

This book has been sitting on my shelf for a long time. I finally read it as part of Book Riot's 2017 Read Harder Challenge  which includes a call to "Read a book that is set within 100 miles of your location" (among 23 others).