The Librarian of Basra : A True Story from Iraq - by Jeanette Winter 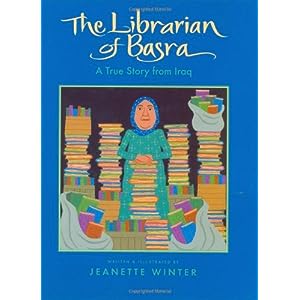 ﻿
A few years ago Nantucket, Massachusetts selected The Kite Runner by Khaled Hosseini as its One Book One Island Read. For middle-grade readers The Breadwinner by Deborah Ellis was chosen, and for younger readers, a picture book - The Librarian of Basra. A friend of mine, who helped select the books, told me that another islander spoke to her and insisted that the selection committee  made a terrible choice, especially with the Librarian of Basra, which, she informed my friend, would make kids think that the U.S. had bombed Iraq! I am not sure whether the complainant didn't know that the U.S. had bombed Iraq, or if she simply didn't think kids should learn about such a thing. In any case, my friend informed her that the U.S. had, indeed, bombed Iraq.

This book tells the story of Alia Muhammad Baker, the Librarian of Basra, who removed all 30,000 books from the library in order to protect them. The library was burned down nine days after she removed the books. It is beautifully illustrated, and celebrates libraries not only as places for books, but where ideas are exchanged.


For more information see this story from the New York Times
Posted by YearofBooks at 10:50 AM