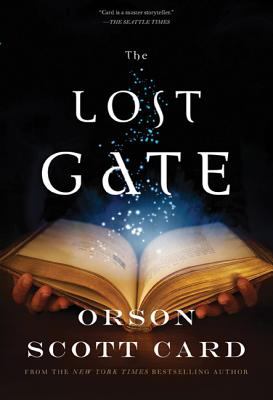 Let's call this one a "ringer". I found it browsing the Leisure Reading Collection at my library (we like to call them the "fun books"). The title was what originally intrigued me, but when I saw the cover illustration - hands holding an open book - and read inside book jacket which alluded to a library, the deal was done.

This is the story of young Danny North who lives with his magical family in rural Virginia, and rarely associates with the "drowthers" (Harry Potter fans know them as "muggles") who live in town. Danny is convinced he has no magical powers but, like Harry, instead has some incredibly potent magic that he is not yet aware of. I had a bit of a hard time getting past my inclination to compare this to to the Harry Potter stories, but I soon realized that Card has created a magical world all his own, with its own rules, and its own set of magic, and which was started long before Harry was a twinkle in Rowling's eye. Moreover, Card's book is written for a more mature audience as some of his characters actually act on their carnal feelings, as well they actually discuss elimination of bodily fluids in some less than delicate language. A parallel story of Wad, who lives in another world, joins Danny's story in the end. Wad has no libraries in his world, so there is no surprise that things do not go as well for him as they do for Danny.

Once Danny realizes that he is a "gatemaker" he knows his life is at stake, and runs away, where he finds other Orphans, magical folk who are not part of a family. This book not only mentions libraries so many times I stopped marking all the pages, it is in libraries that our hero often discovers new ways to use his magic. He first discovers how to purposely make a gate while hiding inside the wall of his family's library and realizes he has been discovered and must escape. Later he tests out his theory that he can create a gate and only pass part of his body through it while visiting the lavatory in the holy grail of libraries: the Library of Congress. It is here where he meets a great librarian who teaches him how to effectively use a search engine, and shows him a fabulous old book with information that starts him on his way to learning more about his gift. And it is here that readers are reminded that Danny is, after all, a 13-year old, when he moons a security guard. One other imporant mention of a library comes when we are reminded that we must pay for library books that are ruined. Danny's housemate Lana pees herself when he tickles her, when Lana's husband Ced picks her up and sets her on top of a book he admonishes them "[i]f that's a library book, they're going to make you pay a fine." Indeed, my friend. A bonus to this story for this Spanish instructor/Librarian is that Danny also has a penchant for languages: a skill that serves him well in the LoC.

Although Danny's greatest magical feat takes place in a high school gym, it is, of course, right and good that he learns so much in libraries prior to that. What Card illustrates is something that librarians see in their jobs everyday: libraries are magical places. It is so for children getting their first library cards; for scholars who find knowledge upon which to build; and for historians who uncover long forgotten archives. We need no gatemaker to open the door for us, the magic is there for us to discover ourselves.

Posted by YearofBooks at 9:02 AM