Based on a true story of children in Syria rescuing books from bombed buildings during a war to create a library, cousins Nour and Amir sort books into categories, clean them, and build shelves from discarded wood to create a library for their neighbors. All found books became part of the library

big books, small books, thin books and fat books. Some were in Arabic, while others were in foreign languages - English Armenian, Greek, French, even Hebrew and Syriac.

The library was always open for those who wanted to read or learn something new.

Rescuers borrowed medical books to learn about the human body and how to treat wounds. Teachers looked for ideas for home lessons. Even Nour's Baba borrowed cookbooks to learn how to make foreign pastries and cakes, looking forward to a day when he could once again try out new recipes.

It was especially troubling for me to read this story of a hunger for knowledge in light of  all the stories I see about those who are attempting to restrict books in the United States. No book in Nour's secret library was deemed unworthy. The books in Nour and Amir's library brought hope to all.

Reading this children's book I was reminded of The Badass Librarians of Timbuktu. Save the books!

Posted by YearofBooks at 12:00 PM No comments:

Email ThisBlogThis!Share to TwitterShare to FacebookShare to Pinterest
Labels: books are our friends, children's fiction, Syria 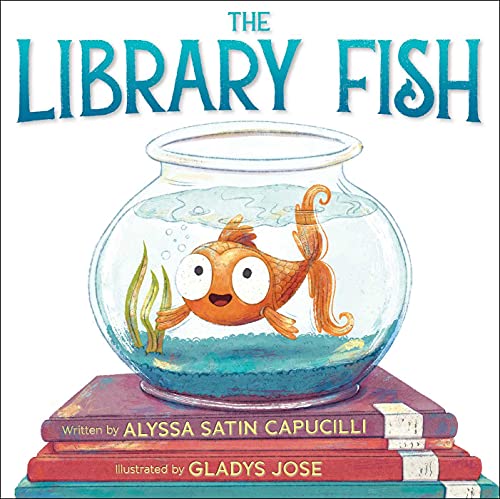 Library Fish loves greeting all the library visitors, and going to story hour, and taking adventures in the bookmobile. When a snow storm closes the library Library Fish learns the real magic of books as she escapes her fish bowl and takes off on some extraordinary adventures.

Posted by YearofBooks at 10:52 AM No comments:

Anne of Manhattan - by Brina Starler

In this reimagined Anne of Green Gables for the twenty-first century, Anne is a graduate student in Manhattan, getting her Masters Degree in Education at the fictitious Redmond College. Diana is her roommate. Anne is a go-getter who somehow manages to work full time at a bookstore, go to school full time, serve as a teaching assistant in a Shakespeare class, and run an after-school program for aspiring middle school writers. And if that isn't enough she can suck a mean dick, too. She also knows how to use the term quid pro quo when oral sex is on the table.

While I appreciate a story of a woman who owns her sexuality, there was much about this one that I just couldn't wrap my head around. The kind of time a person needs to do the amount of work (and play) that Anne does frankly defies the laws of physics. I'm also not sure the author has a firm grasp on what a person needs in order to get an Associate Professorship. Anne manages to score one of these increasingly rare gems of a job after earning her Master's degree. She even has the luxury of turning one job down in order to hold out for the one she really wants. Ummm...no. To begin with one needs a PhD to get that sort of position, and no one turns down such a position simply in hopes of getting the exact job they want.

The library of the Redmond Writers House, located on the ground floor, is one in which we can picture Anne Shirley settling right in

Three original fireplaces had been bricked over decades before, and now contained arrangements of silk flowers or sinuously twisted clay sculptures. Bookcases lined the walls, and although the rooms were small and crowded, with intimate seating arrangements, tall arching windows let in plenty of natural light tinted by multiple verdant green plants spilling out of hanging baskets. The entire library had an airy, bohemian feel to it...

The library is also a dandy place for Anne and Gil to meet to work on their combined thesis project (again, really, not a thing in academia). As it turns out the "middle ground between their two apartments was technically the school library."

Caveat Lector
This ultimately is a romance novel with a rather trite resolution, so Anne of Green Gables fans should take heed. While the protagonist is still a feisty feminist, there are some hard-to-take romance tropes.

My husband and I listened to this on Audible during a road trip.

Posted by YearofBooks at 11:48 AM No comments:

Written by the Director of Strategic Litigation for the Innocence Project the aptly named Fabricant explains how fabricated science has been used to convict innocent people, even in the face of overwhelming evidence to the contrary.

The cover image of the book which shows a dental mold biting into hundred dollar bills is an allusion to the junk science of bite mark evidence. Created by a brotherhood (they were initially all men) of dentists calling themselves "diplomates" (my, that sounds important!) of the American Board of Forensic Odontology (ABFO), they asserted themselves experts on bite marks without actually having done any scientific study on the forensics of bite marks on bodies.

These "experts" would testify (usually for money) in criminal rape, murder, and assault cases indicating that bite marks found on bodies could have only been left by a one specific person (usually the defendant in a trial).

It took over thirty years for this science to be debunked while innocent people were convicted and sent to jail. The author calls this "poor people science" because it is still used, along with other discredited forensics (including ballistics, fingerprint analysis, and hair microscopy) to convict those who do not have the means to hire a good defense attorney.

A few mentions of prison libraries gives this book a space on my blog, but I would have included it anyway since it is really a book about information literacy. It gave me a lot to consider regarding peer review, the gold standard of credible sources for undergraduates writing research papers. I help hundreds of such students every semester, many don't even understand what "peer review" means, they only know their professor told them to include such sources in their paper. The ABFO were peers who reviewed each other. They created their own body of experts without doing any studies, and their junk science is still being used today.

Posted by YearofBooks at 6:28 AM No comments:

May is Mystery Month, and I don't really like mysteries. Often people tell that they think I will like a certain mystery book, or mystery series mostly because they take place in a library, or have a librarian in them. They are almost always wrong, because really I just don't like mysteries. Each May I read one to blog about just so I can include the genre, but (and I can't say this enough) I really don't like mysteries.

I chose this one because it had a witch librarian in it, and I do like witches. For those who like books about orphans who don't know they're magical this one also fills that bill.

When Aurora (Rory) discovers that her late father was a magical person, and that she is being pursued by vampires, she moves in with her three aunts and two cousins who live and work in the library for paranormals. The women are biblio-witches they "weave spell from words".

One thing Rory learns from her Aunt Adelaide is that the library is "semi-sentient" and I was reminded of Ranganathan's Five Laws of Library Science the fifth one of which is "A library is a growing organism". Ranganathan knew that all libraries are semi-sentient?

Of course libraries are also magical, regardless of whether they are for "normals" or "paranormals".

Posted by YearofBooks at 12:04 PM No comments:

Pura's Cuentos: How Pura Belpré Resphaped Libraries with her Stories

In honor of Día of los libros/Día de los niños I read yet another book about Pura Belpré, New York City's first bilingual librarian. Bright illustrations of coquí frogs, mangos, mice and cockroaches show how the stories about Puerto Rico are just as vibrant as the stories of New York City with its fabulous music and dance scene.

Pura knows, too, that stories that are not written down can be just as exciting as stories in books, and that stories in all languages should be told. Everyone has stories to tell and hearing other peoples' stories will make us all richer.

Written primarily in English there is Spanish vocabulary sprinkled throughout. A story for all about stories for all.

Libraries change lives. The books we read, the people we meet, the physical space, the programs all create the magic, and community of the library.
When indifferent library worker Aleisha finds a reading list inside of a returned book she not only changes her own life by reading the eight books, she begins to make a difference in the lives of some of the other library patrons as well. Most notable among these is recently widowed Mukesh Patel, who has yet to return the long-overdue book his wife last read The Time Traveler's Wife. Although Mukesh was never much of a reader, his late wife Naina was an avid reader and library user. Through the magic of books (and the library) Mukesh finds a new connection with his beloved granddaughter Priya. It turns out they both love Louisa May Alcott's Little Women and Mukesh begins to think about everyone who is connected by the books they read.
One of the first things I learned in Library School were Ranganathan's Five Laws of Library Science. Although the rules were written almost a century ago, they remain quite relevant:
Each of these laws is evident in this work about people connecting through books and libraries.
Posted by YearofBooks at 7:17 AM No comments: