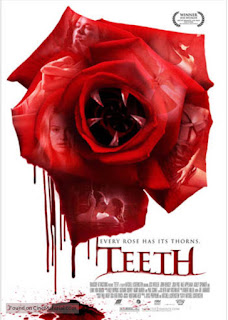 I know I watched this film about a chaste teenage girl who discovers that she has vagina dentata at least two times before, but those were obviously before I started this blog. I read something recently that indicated a library connection and so I put it back on my Netflix DVD list.

When Dawn (Jess Weixler) suspects something is different about her body she does what anyone in the 21st century would do and begins her research by conducting a web search. She types "female genital mutilations" into the search engine which lands her a screenful of results. However, unlike everyone else she doesn't just click on the top link, but rather selects the the trusty link from the public library "your source to information". It is not clear if the link is from the Austin (TX) public library where the story takes place. It seemed more to be a generic public library link.

Definitely not a film for the squeamish. It will likely appeal to fans of Little Shop of Horrors.
Posted by YearofBooks at 6:51 AM No comments: 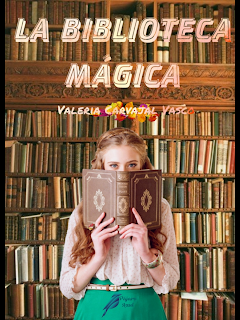 According to amazon I bought this book on April 30, so I must have purchased it for Día de los niños/Día de los libros (aka "Día" or Children's Day/Book Day). I do recall specifically looking for a library-centric, Spanish-language book to read. I usually pick a picture book to blog about for Día but this year I selected a chapter book, so it took me a bit longer to read it.  This is the story of friends Emma, Park, Paige, and Liam who want to take a summer vacation together, but first they need to earn some money. Paige and Park find work at a local store, and Liam gets a job with his uncle. Emma is worried that she will be the only one who won't be earning any money, until her mother helps her land a job at the local library el "único lugar al que muy pocos adolescentes irían a pedir trabajo", as well as "el lugar más aburrido del pueblo" (for those who are Spanish-language challenged, that translates to 'the only place that few adolescents would ask for work'; and 'the most boring place in town').

Emma, however, discovers that the library is far from boring. In a library lover's version of Night at the Museum Emma learns that those who work the night shift have the ability to visit the characters in the books. Beginning with Caperucita roja (Little Red Riding Hood), she moves on to Peter Pan,  Harry Potter; and Crepúsculo (Twilight), among others. From each book she also brings back a souvenir (Red Riding Hood's Cape and Peter Pan's sword, for instance). Far from boring, Emma finds that she not only looks forward to going to work in the library she is more interested in her work than in hanging out with her friends. She is reluctant to tell them about the library's secret until she learns that the mayor wants to close the library because nobody visits it, and it isn't a money maker. With the help of her friends and the other library employees, she comes up with a plan to save the library.

I must say I was left a little wanting with the resolution they came up with which I saw as stop gap at best, and had nothing to do with magic. No one wanted to reveal the library's secret for fear of exploiting it. However, if I were writing the ending to this book the friends would have sparked interest in the library, and helped it to make money without letting anyone in on the secret by  strategically visiting books, bringing back cool relics, and selling them. In fact I thought this solution was so obvious I really was stunned that it wasn't how the book ended.

Posted by YearofBooks at 8:53 AM No comments:

Nothing to See Here - by Kevin Wilson 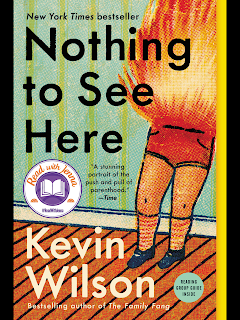 When her frenemy Madison Roberts contacts Lillian Breaker and asks her to come to Tennessee from her home in Pennsylvania, offering her a mysterious job, Lillian accepts. She takes the bus to Nashville where she is met by the enigmatic Carl who works for Madison and her senator husband, Jasper.  Upon arrival at the estate where Madison lives with her toddler son (Timothy) and husband Lillian learns that the senator has two children (twins) from a previous marriage, whose mother had recently killed herself. The twins (Bessie and Roland) have an unusual affliction wherein they burst into flames when upset. The fire does not hurt them, but can be dangerous to people, animals and things near them. They are coming to live with Madison, Timothy, and Jasper. Madison wants Lillian to be their governess. Fortunately for Lillian the twins like to read. In fact, as Roland points out to Lillian when he first saw the well stocked bookcase Madison provided for the twins "all we do is read".  And although Bessie informs Lillian that she'd already read many of the books on the shelf some of them looked "pretty good". Lillian wastes no time in telling them that they can get more books at the library.

And good on her promises, Lillian asks Carl to drive them all on an outing to the library so they can research famous Tennesseans. Bessie chooses Dolly Parton and Roland  decides on World War II hero Sargeant Alvin York. They find the books they want when they get to the library, but soon realize that none of them has a library card. Carl points out that that they need proof of address "like a piece of mail" to get one, and none of them have a piece of mail with them. It seems to me that Carl must have had a driver's license but he never suggests that. He does tell them that Madison is on the Board of Trustees and that they can come back later with her card. Instead they just decide to steal the books. I expect that if they had simply asked to call the senator's wife, who was also a library board member, they could have gotten permission to check the books out, but no one thought of this solution.

It is always best to ask about policies for checking out books. Librarians really do want you to get the information you need.
Posted by YearofBooks at 8:25 AM No comments: