The Brass Teapot - the movie 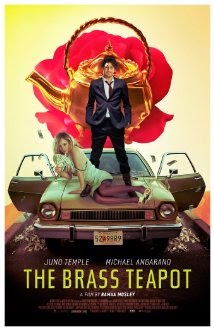 In this fantasy film, struggling newlyweds John and Alice (Michael Angarano and Juno Temple) discover a magic teapot that sends them cash whenever they feel pain. As they get richer, they must discover new ways to hurt themselves in order for the teapot to keep up. They spend one afternoon at the public library researching the ancient teapot, where Alice rips a page out of a book (tsk, tsk) and a librarian "shushes" them. Alice also asks John if he's ever had sex in a library (the audience never finds out if they follow up on this idea). This really could have been a much better film with more self-exploration by the two main characters as to what price they were willing to pay for wealth, especially as they begin to exploit others' pain for their gain, but it fell short.
Posted by YearofBooks at 11:09 AM No comments:

The Vacationers - by Emma Straub 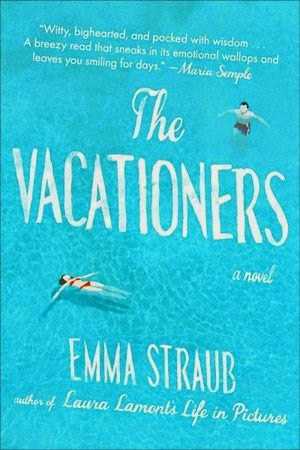 This story about a batch of unlike-able characters on a vacation that none of them want to be on in Mallorca, Spain, was good reading material for the airplane ride I took recently. It had a lot of places to break, and didn't require much thought to keep the plot lines and myriad of characters straight. Franny and Jim Post; their two grown children, Bobby and Sylvia; Bobby's much older girlfriend Carmen; and Franny's best friend Charles, and his husband Lawrence negotiate personal issues, and private spaces in the house they rent together.

None of "the vacationers" actually took a trip to a library, although Lawrence did receive an e-mail from the New York Public Library, which he deleted as "junky" along with the forwarded cartoons from his mother, and the J.Crew ads. The other two times any library was mentioned made clear that these folks just didn't see libraries for the spectacular places they are.

Philandering Jim remembers his high school library as the only place he could get attention from girls (to join their study sessions), before he had his growth spurt.

Carmen doesn't see how "being locked up in this house on Mallorca" is a real vacation and likens it to "the day in fourth grade when [her] mother had forgotten to pick her up at the library after school." Of course this Spanish-speaking librarian/blogger would consider being in a library on Mallorca a truly satisfying vacation. To be fair though, I don't blame her for not wanting to spend her vacation with her boyfriend's morose family.

Perhaps if these people knew how to enjoy a good book they would have been happier.
Posted by YearofBooks at 11:01 AM No comments:

Land of Love and Drowning - by Tiphanie Yanique

I had the pleasure of hearing Ms. Yanique give a reading and Q&A last November when she visited Bridgewater State University. She read from Land of Love and Drowning which I then attempted to check out of the library where I work (which was only there because I ordered it knowing the author would be coming to campus) but someone had beaten me to it. I was finally able to check it out over the winter break. This is a wonderful tale about three generations of Bradshaws during the early and mid-twentieth century. This novel tells some of the history of the Virgin Islands while taking the reader on a journey of magic realism. The narration in the story alternates between sisters Annette and Eeona, and an omniscient narrator giving several perspectives on the family.

The Bradshaw sisters each takes advantage of the library in her own way. Older sister Eeona, living alone, uses the library in the traditional manner - finding books to read "Thrice in one week she went to the library and picked up a novel. She plowed through the books until the gas in the lamp burnt down." Annette makes use of the library's typewriter rental service to write her husband a letter requesting a divorce, she also researches baby names for her second daughter there, and decides on Eve Youme.

I remembered during the reading that the author said something about naming being the first sorcery a parent performs on a child. While I hadn't thought about it in exactly those terms I realized that she was absolutely right. When parents name their baby a certain destiny is created for the new human, and while parents may have their own ideas about meanings and monikers, it is also true that the parents' spells can come undone


...naming is a voodoo all parents do. Annette listed the child's second name as Youme. She'd spent hours in the island's library looking up baby names instead of studying for the teaching certificate. The name didn't mean "ours" as she'd first hoped. It meant "dream." But that also made sense and perhaps what was ours was all a dream anyway. Something to keep striving for or something all in our mind-depending. And as these things go on island, the child was never called Eve. She was called Youme early on, but in the islands' history she will simply be called Me. History could do that, change a person's name. History was something so simple and insistent that none of us has escaped it.

I enjoyed the imagery, the story, the characters, and learning a bit about the Virgin Islands.

Lagniappe:
I also read Yanique's collection of short stories How to Escape from a Leper Colony. The final story in the work "Kill the Rabbits" includes one description of a prison library:


When I'm not staring out at the sea I lime in the library. I prefer the salt air to the library's a.c. but sometimes I like the quiet. I like the hard wooden chairs with firm backs. It's a small quiet place, like a vault with precious gold bullion. A vault inside the jail. The tile on the floor is scrubbed shiny and clean and my shoes squeak when I walk. They only let three of us in at a time. And we have to sit at different tables. There are only three long tables in the library. There's a computer in the corner that connects to the Internet.


She was in a yellow dress that was shiny and out of date-out of place in a tapas bar....She sat at the edge of a bar stool, her back so straight that she reminded me of a librarian.

Posted by YearofBooks at 10:53 AM No comments:

Salvage the Bones - by Jesmyn Ward 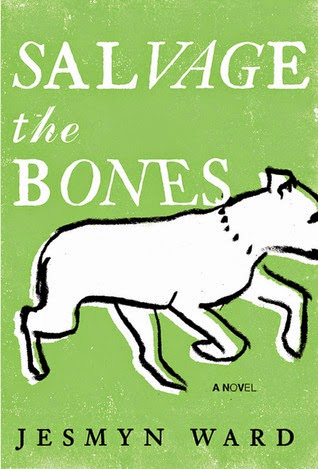 Taking place over a twelve-day period, as hurricane Katrina develops over the Gulf of Mexico, this novel tells the story of Esch, and her brothers and father as they prepare for the storm. While Esch's father has his children collecting wood scraps and filling water jugs they all have other things on their minds. Esch has just discovered that she is pregnant; brother Skeetah is busy taking care of a new litter of puppies; and Randall wants to go to basketball camp. When the disaster hits each of these takes on a different significance.

It was beginning to look as if I would not be blogging about this book, but five pages from the end I was thrown a bone, so to speak. As Esch, her brothers, and friend Big Henry survey the storm's damage - the complete destruction of their neighborhood - Esch notices Randall "pointing down the street, pointing something out to [her youngest brother] Junior, where the library was that he visited with his school once, maybe." Of course I am always on the lookout for libraries when I read, so this small passage might be easily missed by others, especially among the rest of descriptions of annihilation, but for me it shows a true sense of loss of potential, and a loss of safety net. Libraries often are places where people can go when disaster strikes, and there is no place else to go (just as the Ferguson, Missouri Public Library stayed open while the schools were closed). It is in the loss of the library that I see the loss of hope.

Posted by YearofBooks at 6:29 AM No comments: