The Soul Thief - by Charles Baxter 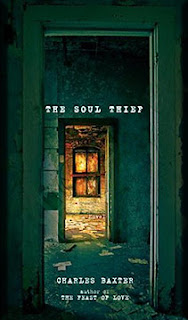 In 1973, back before "identity theft" was a something people worried about, Nathaniel Mason crosses paths with the spooky Jason Coolberg, who knows more about Mason, and his family, than even his girlfriends do. While the reader may find it disturbing when Coolberg shows up wearing Mason's missing clothes and otherwise stalking him, Mason seems to take it in stride.  A passage that describes yet another buglary of Mason's apartment "more clothes seem to be missing, more objects buglarlized" makes it clear that he knows who is stealing his things, and he has no intention of calling the police. Just past the halfway point in this book the story jumps to 30 years later and Mason is living a rather ordinary existence with his wife and two children in the suburbs and Coolberg reappears in Mason's life, still creepy as ever.

There are several places in the story in which books and reading are mentioned, only one passing mention of a library, though, when Mason wonders where his girlfriend, Theresa, is when she doesn't answer her phone. "Perhaps she is resting up after her social exertions. Or is out in the library, foraging in the stacks." Since she is a graduate student, that is a good bet. There is also one librarian metaphor. Mason and Coolberg reminisce about Theresa during their reunion dinner. Mason says "She was pretty." Coolberg disagrees. "Thesesa was attractive without being pretty. She had the banal sensibilities of a local librarian who's moved to the big city and started serious drinking and making semi-comical overstatements to disguise her obvious gaps." That's quite a specific stereotype. How many librarians are really like that?

A rather surreal story, this probably warrants a second reading, which would likely reveal layers of meaning, and some foreshadowing that I missed. I will leave that for someone else to do, though.
Posted by YearofBooks at 10:00 AM No comments:

Email ThisBlogThis!Share to TwitterShare to FacebookShare to Pinterest
Labels: fiction

Nominate your favorite librarian for the "I Love My Librarian Award"

Each year the New York Times, the American Library Association, and the Carnegie Corporation sponsor the "I Love My Librarian Awards". Nominate your favorite, school, public or academic librarian for this prestigious award. Nominations for 2011 are accepted through September 12.
Posted by YearofBooks at 5:42 AM No comments: 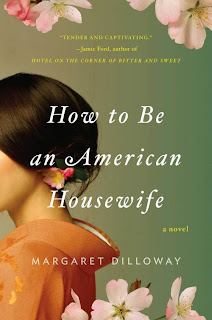 These are juxaposed with Shoko's wishing she had a book while waiting for some lab results: "Charlie and I weren't big readers. Books were too expensive and library books were full of germs from all the people who had checked them out." I was left to wonder what happened to the curious young woman with diplomatic aspirations who read all she could.
Posted by YearofBooks at 6:45 AM No comments:

When James and I moved to Bridgewater, Massachusetts 14 years ago one of the first things we did was get library cards. Our daughter was born within two weeks of our arrival, and I was thrilled to find out that there was a story hour for infants and their caregivers. I made some of my first friends in Bridgewater through this program. I still cry when I think about how much it meant to me. While Paloma was growing up we took advantage of so many programs the library offered including summer reading, puppet shows, and craft classes. Our whole family was devastated when tax payers' refusal to fund the library forced it to cut its hours to 14 a week (from 65). Programs were virtually disappeared and it was almost impossible to find a time that we were free when the library was open. The wonderful staff of course did the best they could, and although the hours are up to 30 a week now, things have not been the same for several years now. I was recently appointed a trustee to Bridgewater Public Library and hope that the board, along with the enthusiastic new director, can bring the library back to its former glory.

Arguments that the library is expendable in times of economic crisis so as to pay for essential services such as police and the fire department are misguided. We can expect that if there is no safe place to go after school (i.e. a library) that crime will go up, and we will need more money for police. Exacting fees from library users to pay for services was a topic of discussion even back when I was in library school 20 years ago. But Keith Michael Fiels, exectutive director of the American Library Association, explains why we need free public libraries more than ever.
Posted by YearofBooks at 6:37 AM 1 comment:

First We Have Coffee - by Margaret Jensen

Although I very much enjoy memoir as a genre, I usually try to avoid sappy ones, such as Jensen's. It is the story of a Norwegian immigrant family during the early and mid 20th century. James and I picked it up from our church's used book sale. We were drawn by the book's title, and the 50-cent price was right. James immediately set in to reading it as part of his coffee culture research, and within minutes read me this line from the book: "Mama was reminded of the advice her mother had given her earlier in the day: "Take him as he is and you will be happy. He loves God, the library - and you - in that order." So, I knew I would have to read this as well. And while there is no competition between how often coffee is mentioned (on almost every page!) to how many times libraries are (about 12) it is clear that libraries were important to Jensen's father ("Papa") - a Baptist minister. He often must be hustled out of the New York Public Library at closing, and his excitement at being offered a position in Chicago, after many years of serving in Saskatchewan, is induced partially by the thought of the big-city library. When her father is finally sent back to New York, he tells his now-grown daughter to visit so he can show her the sights. He begins by saying "Tomorrow I'll take you to the library..." Carnegie Hall, the Statue of Liberty Radio City and Coney Island can wait until after this most important stop. Of her father's death Jensen and her siblings "couldn't grieve...in [their] imaginations [they] saw him in the libraries in heaven, talking with his beloved authors."

James' "coffee take" on this work can be found on his "Environmental Geography" blog.

Posted by YearofBooks at 11:09 AM No comments:

The Revenge of the Radioactive Lady - by Elizabeth Stuckey-French

This novel, with its delightfully kitschy title and cover illustration, is based on a real experiment undertaken during the cold war, in which pregnant women were given a radioactive "potion" to drink without their knowledge or consent. Our heroine, Marylou, (aka Nance, a name she takes from a character in a B movie about a 50 foot tall woman) is out to exact revenge upon the doctor who conducted the experiment and ultimately caused the death of her daughter, with whom she was three months pregnant at the time of the experiment. When she discovers the now retired doctor lives in Tallahassee with his daughter and her family, she moves from her home in Memphis and begins picking away at the peripheries of his life by becoming intimately involved with his three teenage grandchildren. It is because of these ties that the doctor's youngest grandchild, thirteen-year-old Suzi, asks MaryLou to take her to the public library, "the big one downtown." When Marylou discovers which books Suzi has checked out she understands why Suzi hadn't asked one of her parents to take her, and why she wanted to read them at Marylou's house, rather than her own home - all the books were about sex. And then Suzi confides a shocking secret that leaves Marylou unsure of how she should proceed.


I thought this passage was a beautiful illustration of why it is important for library records to remain confidential. Although an adult reader may argue that Suzi needs to talk to her parents, the the truth is that teenagers don't like to talk to their parents about sex, especially where it concerns their own sexuality. Suzi needed answers and she knew the library was a good place to start.
Posted by YearofBooks at 6:54 AM 1 comment: