After a rather dry spell of reading four books in a row without libraries, I was beginning to think that I would not be blogging about this one either, but about 50 pages before the end of this 374 page work I came upon the one and only mention of a library. And really it was just the idea of a library. As first-lady Betsy Bernstein  prepares to make her husband the first president to become divorced while in office, advisor John Van Dyke talks to her about her decision to leave. Will she stay through this term? "...eighteen months even living separately, is going to be difficult. I offer no guarantees" she answers. Van Dyke realizes she is pretty serious but can do "nothing more than make a joke. 'So fund-raising for his library is out of the question?'"

So, not much of a library book, but I do believe it is the first time I've blogged about a presidential library.

The story itself was pretty good. It takes place in the summer of the year 2030, a world in which cancer and obesity have been virtually eradicated, allowing people to live longer than ever. The "olds" (as the younger generation refers to those over 70) have become the new scapegoats, with the young people believing they are sucking all of the resources from them. It is also the year when "the big one" finally hits Los Angeles. The destruction and devastation of the 9.1 earthquake are so severe that not only are there not enough government resources to rebuild, the United States is unable to borrow the trillions of dollars needed from other countries. This isn't so much of a dystopian novel, though. More of a satire.

Posted by YearofBooks at 9:41 AM No comments:

A Fantastic Holiday Season: The Gift of Stories - edited by Kevin J. Anderson and Keith Olexa

This collection of sci-fi short stories all have a holiday theme, and all wrap up with an appropriately upbeat ending, although some of them take a rather harrowing journey to get there. None of them have any action actually taking place in a library, although three of them did mention the use of a library. In Brad Torgersen's "Astronaut Nick" young Jimmy learns from his school library that the filth inside of a chimney was "equivalent to a spaceship exhaust". Leo, in Nina Kiriki Hoffman's "Close Knit", spends some time in the library reading magazines, and looking at apartment ads, to avoid "the return to his parent's house as long as possible". And at a Hogwart's-like boarding school created by Mercedes Lackey in "The Longest Night" student Vickie Nagy, while sad to not be with her parents over the Christmas break, realizes it won't be so bad as she will "have full access to the school library and other magical amenities" while enjoying the "really posh Guest Quarters".

My favorite story was the last one - "Unappreciated Gifts" by Patricia Biggs, about a heterosexual werewolf set up on a blind date with a gay "fake" vampire. Alas, no libraries though.
Posted by YearofBooks at 10:24 AM No comments: 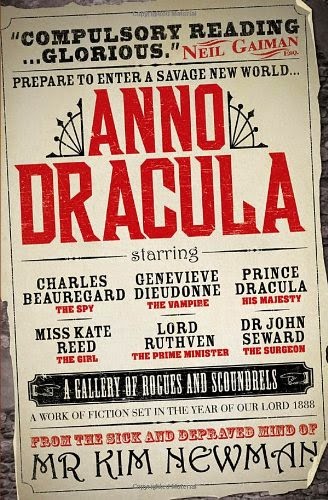 This novel, set in Victorian England about vampires, and "warm" bodies coexisting also brings together the lives of historical figures and literary characters. The story is about the search for the legendary Jack the Ripper who is killing vampire prostitutes with his silver knife. There are cameo appearances by Bram Stoker, Oscar Wilde, Mycroft Holmes, Beatrice Potter, H.G. Wells, and Dr. Jekyll among many others. It is worth reading just to find the literary allusions, although the only library in the book is the personal library of the spy Charles Beauregard.

An annotation appears at the end of the narrative as a key to all the literary characters.
Posted by YearofBooks at 1:13 PM No comments: