That Book Woman - by Heather Henson

Franklin D. Roosevelt's Works Progress Administration (WPA) program put people to work during the depression. According to this article many more men than women benefited from the WPA. However, the Pack Horse Library Project employed mostly women. The "Book Women" traveled on horseback to remote areas where schools and libraries were scarce. That Book Woman tells the story of Cal, who lives in the Appalachian mountains of Kentucky. His resentment that the Book Woman is keeping his sister from doing more chores changes to admiration as she comes through snow, fog, and rain to bring books to the entire family. Cal eventually realizes that he wants to read, and asks his sister for help.

This picture book turned out to be a real tear-jerker for this librarian. Get out your hankies and listen to the whole story on the YouTube video above.

Posted by YearofBooks at 10:47 AM No comments:

My Librarian is a Camel - by Margriet Ruurs 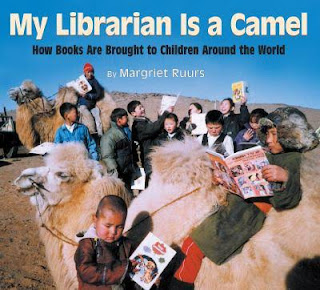 I like to do special posts for National Bookmobile Day. I haven't been to a bookmobile in a long time, but I have such fond memories of going to the Baltimore County Public Library bookmobile when I was young. Although we often went to the branch library in Catonsville, I was always enchanted by the library bus.

Ruurs' book takes readers on a journey around the world, to 13 countries on six continents, where library services are delivered in unexpected ways. From libraries on wheels (including a wheelbarrow on at the Blackpool beach in England) and boats, horses, elephants, and (of course) camels the book demonstrates a universal love of books and reading. As explained by a the librarian in the blue truck library in Azerbaijan "the mobile library is as important as air or water." Or, as a young patron of the Storyteller bus in Pakistan enthuses "This bus is magic!"


They begin their journey in a four-by-four truck, on a road cut into the steep hillside. After a long bumpy ride they eventually come to a village called Mogi-agi, which means "up-and-down road,"...but the volunteers aren't done yet. They still have to reach a further destination deeper into the jungle: the village of Amia. They ford a river in their truck and drive until they can go no farther. Then they unload the boxes of books to take them to the small villages in the highlands. From there they must walk for four hours, up the pass and over several ridges, crossing log bridges while carrying the boxes of books on their shoulders.

They are rewarded when they reach Amia and "young people come running to meet them...[who] gratefully read their books and look forward to the next supply!"
Posted by YearofBooks at 11:01 AM No comments: 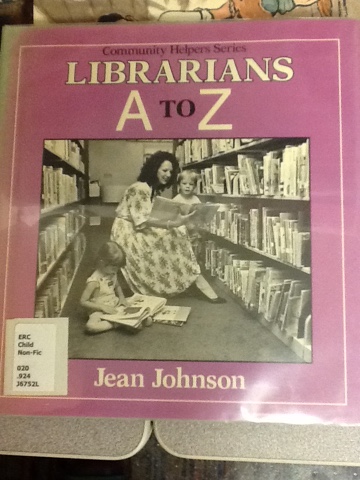 This work, part of the "Community Helpers" series, is an alphabetical photo essay showing what librarians do. Published in 1988 it is a bit dated with its pictures of card catalogs, book pockets and "due date" stamps, nevertheless in just under 50 pages it goes a long way in breaking the stereotype that librarians do nothing but sit around and read all day. Librarians are shown doing art projects, helping people with research, creating exhibits, choosing materials for purchase (as well as discarding or "weeding" out-of-date or damaged materials), doing story hours, and driving bookmobiles - all things that are still part of our jobs. The librarians appear engaged with their work and with their patrons, working to instill a love of reading and learning.

Posted by YearofBooks at 12:47 PM No comments:

Avenue of Mysteries - by John Irving

John Irving is still going strong. In his most recent work he tells the story of Juan Diego Guerrero, a writer who grew up as a "pepenador" (scavenger) in the slums of Oaxaca, Mexico. Juan Diego had an advantage over the other children who lived picking things from the dump - he knew how to read (in Spanish and English). He was also the only person who could understand his clairvoyant sister's (Lupe's) unique language. Ultimately he ends up living in Iowa with his new guardians - a gay priest (Edward Bonshaw) and his transgender lover (Flor).

Since Juan Diego is such a good reader it seems especially appropriate that when he his taken in by the Jesuits at Niños Perdidos (Lost Children) that he and Lupe sleep in what had "formerly been a small library" with most of the books still on the shelves. It is ironic, then, that it is on the Jesuits' shelves that Juan Diego reads about science and history which makes him question the teachings of the church, and what ultimately inspired him to become an author, despite the fact that

the library of English-language literature at Lost Children was limited and generally not newer than the nineteenth-century models of the form, including the novels Father Alfonso and Father Octavio had designated for destruction in the hellfires of the basurero and those essential novels Brother Pepe or Edward Bonshaw had saved for the library's small collection of fiction

Fires at the dump (basurero) were perpetual, and Juan Diego, a lover of reading, often saved books from the inferno. "It takes an eternity to read some books, even (or especially) some books saved from burning."

Reading aloud with Bonshaw in the Niños Perdidos library is one way that the two develop a kinship. They argued about the age-appropriateness of some books, and Bonshaw's censorship of sex scenes. Flor, however, did not read. This she tells to an AIDS-ravaged Mennonite in cowboy boots and and a pink cowboy hat as the two wait for treatment at the Virology Clinic in Iowa City. She jokes that the two should rob a bank to which the cowboy responds "I know North Liberty pretty well...There's a library that sure would be easy to knock off." Flor explains that she doesn't read, and is, therefore, "not interested in sticking up a library".

Of course, any library user can tell you that there is no need to "stick up" a library. All you need is a (free!) library card and you can have anything you want!

Posted by YearofBooks at 12:54 PM No comments: