Looking for Alaska - by John Green 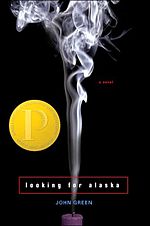 Last week the American Library Association released its list of the ten most challenged books of 2012. I immediately recognized one of them, Looking for Alaska, as the one my daughter accidently left behind when she went back to her boarding school after a weekend visit. I really had no choice but to start reading it myself. And, I stand by what I wrote in my post about the book Testimony - parents of kids in boarding school shouldn't read books about boarding schools (Harry Potter of course not withstanding). Knowing what I do about book challenges, it is not hard to figure out why this one made the list: underage drinking, suicide, questioning of authority, and teen sex all figure prominently, including an unforgettable passage in which one teen, Alaska, gives instruction on how to perform fellatio to two of her classmates using a tooth-paste tube. With such busy social lives pulling pranks and giving blow job lessons it is no wonder these kids don't seem to have time to use the school's library. The only three times it is mentioned is as the location  of one of the many pranks (a Volkswagen Beetle was placed inside), the place where the "Weekday Warriors" (the rich kids who went home on the weekends) sat outside of, and a place where Miles "Pudge" Halter sometimes spots young Lara (from whose lesson in the performance of oral sex he was the direct beneficiary). Although we have no direct knowledge of Alaska using the library, she does keep a personal Life's Library which "filled her bookshelves and then overflowed into waist-high stacks of books...piled haphazardly against walls". However, she explains to her new friend Miles that she'll have "more time to read them when [she's] old and boring." Right now "there is so much to do: cigarettes to smoke, sex to have, swings to swing on." Alaska's Life's Library also becomes the object of a prank, and sadly many of the books are destroyed.

Based on the marker my daughter placed in this book, she has not yet gotten to the tooth-paste tube episode. I imagine she will die a thousand deaths when she realizes I not only read it, but blogged about it as well.
Posted by YearofBooks at 5:04 AM No comments:

With a High Heart - by Adele de Leeuw 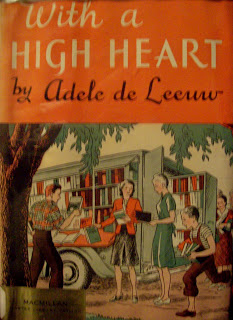 In honor of National Bookmobile Day (April 17) BookRiot posted reviews of "5 Great Books about Bookmobiles". I couldn't resist this title, and the fact that I found it in the very library where I work seemed to be destiny. I've always been fond of bookmobiles, and there are still a few around even in the 21st century. I got my first library card from the Baltimore County Public Library Bookmobile in the early 1970s. I thought it was much better than my older sister's card, which came from the Catonsville Branch Library, because mine had a blue star stamped on it, whereas hers had a boring old black star. There is a certain romance about bookmobiles, and this book is a romance novel about a bookmobile.

Poor Anne McLane was so counting on being assigned to the oh-so-modern Claremont Library for her summer library work experience, after all she was the star student. How could Miss Pruitt have given that cushy assignment to mousey Sophie Whitcomb, while she (Anne) is exiled to Kenyon County Library? But it seems wise Miss Pruitt knew what she was doing. Not only did Anne learn a heck of a lot more about running a library than she bargained for, how else would she have ever met dapper Matt England, the smart young farmer, if the bookmobile she was assigned to drive had not broken down near his property? She also saves a drowning child, mollifies a bitter blind man, saves the day when she keeps an event from cancellation, and otherwise keeps the dreams of the citizens of Kenyon County alive - all this in the space of one very hot summer, whew! Likewise, Sophie's assignment brings her out of her shell.

This book was written in 1945 and certainly gives a great sense of the times. War rationing is an issue when the bookmobile is threatened with a cut in gas and tire rations, which would have prevented the satellite stations from receiving their books. Beyond this though, is a clear subtext about women's roles, even working women. There is no judgement about Rilla, who is only working in the library until her soldier fiance returns home so she can marry him. Her co-workers do seem unsympathetic to her, though, when his daily letters stop coming, which makes her pretty (understandably) grouchy. When she receives word that Dill has been killed they offer "mute and awkward sympathy", and suggest that she keep working!  Indeed, there are several passages that suggest that women should remain "cheerful" and even decorative, even in the face of adversity. The book opens with this description of the aforementioned Sophie Whitcomb, who actually has the nickname "the Mouse"


she was so mousy...[d]un-colored hair and gray tweeds and no make-up whatsoever were bad enough (emphasis mine)..she tiptoed down corridors and spoke in a subdued voice that sounded half-frightened, and she was apologetic and effacing when she should have been vigorous and prominent

The book makes evident when it is appropriate to be vigorous and prominent (for instance to save the bookmobile) but it just as evident when a woman should keep her opinions to herself. Anne's dissatisfaction with her work assignment is obvious to those around her and she is given a dressing down by Matt when when he notices that she doesn't seem thrilled with her assignment, and suggests she go about it "with a high heart". Of course Anne must eat crow in the end, when it turns out he was absolutely right.

It is also evident that anyone can learn to do the job of a librarian (which after all is women's work), as Ada Howland, former actress, tells Anne


...when they started the Library...I just jumped at the chance of being in charge. Of course I didn't know a thing about books; but I was a great reader and was terribly fond of them, and no one else seemed to have the time, and the salary was so tiny...

This short passage hits two hot buttons for me: a myth that all it takes is a love of books to be a librarian (especially interesting in a book about a library school student); and a sad truth that the salaries remain small (after all it is women's work).

Beyond bookmobiles, some Latin American Countries have found other innovative ways to deliver books to off-the-beaten-path villages. Find out about the Biblioburro and the Bibliolancha.

Posted by YearofBooks at 3:54 PM No comments: 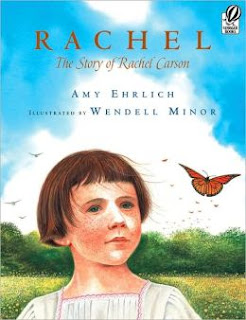 The Lottery - the movie 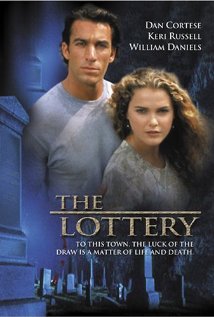 When my daughter read The Hunger Games I asked her if she knew about Shirley Jackson's short story "The Lottery." She said she had never heard of it. I found it in a collection of short stories and suggested that she read it. She deemed it "creepy" and wondered why I suggested she read it. "You did see the connection with The Hunger Games, right?" Well, yes, she had. But the story was creepy. As if Suzanne Collins' dystopian novel was just another Young Adult teen angst story.

I remembered watching a made-for-TV movie based on "The Lottery" sometime before my daughter was born, and searched for it on Netflix, I found it listed, but not yet available, with an "unknown" date. I put it on my "Saved" list and hoped it might show up sometime. It finally did, and my whole family sat down to watch together. In this adaptation, Keri Russell plays Felice Dunbar the innkeeper's daughter in the fictitious town of New Hope, Maine (where something evil is afoot). Felice also happens to be a school teacher, as well as the town librarian. The library, which is only open in the summer is small, but has a "good selection". I wonder if it includes Shirley Jackson's work?

For a made-for-TV movie, this was a pretty good psychological thriller. And it certainly busts some librarian stereotypes. Russel's character is not only multi-dimensional, she is hot!
Posted by YearofBooks at 11:25 AM No comments: