The Blind Assassin - by Margaret Atwood

I do enjoy a good bit of metafiction. In the tradition of Irving Wallace's The Seven Minutes; Ann Patchett's Commonwealth; and Cornelia Funke's Inkheart Atwood's The Blind Assassin tells the story of a fictitious novel of the same name.

Laura Chase's posthumously published book (following a questionable suicide at the age of 25) has a kind of cult following. Although some love it and it was "well received in critical circles in New York and London",  others thought it

would best be forgotten. Although it isn't...even after fifty years it retains its aura of brimstone and taboo. Hard to fathom...as carnality goes it's old hat, the foul language nothing you can't hear any day on the street corners, the sex as decorous as fan dancers...

However, even the "whimsical" sex was enough for the book banners to come out against it

What people remember isn't so much the book itself, as much as the furor: ministers in church denounced it as obscene, not only here; the public library was forced to remove from the shelves, the one bookstore in town refused to stock it. There was word of censoring it. People snuck off  to Stratford or London or Toronto even, and obtained their copies on the sly, as was the custom with condoms. Back at home they drew the curtains and read, with disapproval, with relish, with avidity and glee - even the ones who'd never thought of opening a novel before. There's nothing like a shovelful of dirt to encourage literacy.

There are more than a few mentions of private libraries. Other libraries get a bit of ink as well. The Chase sisters, Laura and Iris (the narrator) take their lessons in their home library from a succession of governesses and other instructors following the death of their mother. The curiously named Miss Violence gave the girls the run of the library and "let us do what we liked" while she (Miss Violence) "sat by the window and read romantic novels from the lending library".

An aging Iris also considers what do with a trunk full of "notebooks...typescript...letters to publishers ... corrected proofs...[and] hate mail". Leaving this archive to a university or library where it "would be at least be appreciated...in a ghoulish way" seemed reasonable.

There were more than a few scholars who'd like to get their claws into all this waste paper. Material [emphasis in original] they'd call it - their name for loot.

There is a somewhat surprising ending, although as Iris points out to her audience "you must have known for some time".

It took me a while to get into this book. In fact the first time I tried reading it was about twenty years ago. However, I not only finished it this time, I was sorry when it ended.

Posted by YearofBooks at 12:49 PM No comments:

Off the Edge - by Kelly Weill

The rather long subtitle of this work is "Flat Earthers, Conspiracy Culture, and Why People Will Believe Anything". Weill immerses herself into the culture of the Flat Earthers to discover how and why they came to believe. The short answer: it's all YouTube's fault. There is of course a lot more to it, but most contemporary Flat Earthers got started by going down a YouTube rabbit hole, and once they went down they found more and more videos by other people proclaiming to have done "experiments" that prove that the world is flat.

I must admit that until I read this book I assumed Flat Earthers were putting us on, but not so. They are indeed quite serious, and are ready to fight (some to the point of fisticuffs) with those who disagree. Evidence to the contrary is unlikely to sway those who subscribe to the Flat Earth theory. Nor does the threat of loss of companionship. Many have lost family and friends over the issue. Some have severed almost all ties with loved ones and only have the online community of other Flat Earthers for companionship. Conspiracy theorists of all stripes have, sadly, always allowed this to happen. As Weill describes the disappointment of the Millerites in the 1840s when the apocalypse failed to materialize as predicted by their leaders

...many members only became more fervent in their belief, proclaiming that the real end was still coming soon...believers let their crops rot and their friendships fail...These groups often find trivial factors to blame for their disappointments...

Libraries are at the front lines of combating misinformation, disinformation and conspiracy theories. Weill finds a topographic map in a library that refutes some psuedo-science described in a 1930 Leaves of Healing newsletter which purports that "Flat Earth belief as a matter of salvation or hellfire".

Libraries can also provide information that only intensifies the arguments of a true believer.  In 1919 Flat Earth Society founder Samuel Shenton theorized that if an aircraft hovered over the earth that it could simply wait until the its destination caught up with it (since the earth spinning on it's axis after all). He was vindicated when he found plans for a similar airship (created by another flat-earth believer) in a library. And, rather ironically, it was research in his local public library that led Charles K. Johnson to Shenton, and the International Flat Earth Research Society (IFERS) in the early 1940s. Johnson was able to contact another flat earth believer Wilbur Glen Voliva who "confirmed" everything Johnson believed.

As we debate how far social media should go in monitoring speech in order to combat misinformation, and as book banners across the country attempt to remove materials from schools and libraries in unprecedented numbers, the need for librarians (never mentioned in this book), who can help people navigate their research, is made abundantly clear.

Posted by YearofBooks at 7:41 AM No comments: 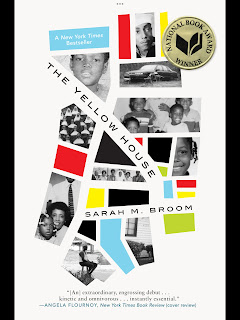 My husband and I attended Broom's virtual session last year at Boston University's Anti-Racist Book Festival. We had not heard of her before, but she piqued our interest, and we ordered the book on Audible and listened to it together. The Yellow House is a memoir not only about the specific house in New Orleans where the author grew up, it is a book about our relationships with the places that form us.
The youngest of twelve children, Sarah was born into the Yellow House where she lived with many of her siblings, although some of the oldest never lived there. The Yellow House was located in New Orleans East, part of the city's Ninth Ward. Hurricane Katrina was the second Hurricane the author, and the Yellow House experienced. As a baby Broom and her family were evacuated when Hurricane Betsy rampaged their home in 1965.
Although her school libraries get barely a passing mention, as a college student at the University of North Texas (where the "cost of [her] ignorance about college was high") she was

ravenous about learning, nearly living at the Willis Library where [she] spent seven or eight hours at a time hunched in a cubicle reading books about subjects fellow students seemed already to know.

After graduation, and a Master's degree from the University of California, Berkeley, Broom moved to New York to take a job with O Magazine. There she met Samantha Power, author of A Problem from Hell at an author event at the New York Public Library. Power convinces Broom to go to Burundi (a small African country mostly known as a neighbor to Rwanda).
Bloom eventually makes her way back to New Orleans where she researches the history of the (now destroyed) yellow house at the New Orleans Public Library.

To find the history of the Yellow House, I had to search original deeds, chains of titles, successions. I stalked the Conveyance Office, the Office of Vital Records, the Real Estate and Records Office in city hall, the Notarial Archives, and libraries. The search was full of cross-referencing and confusion.
I arrived many mornings at the main branch of the New Orleans Public Library in the business district, just across from city hall, and waited in line for the doors to open. If you didn't know better, you'd think the city was full of people eager to read, but actually the line was full of homeless people who had slept outdoors and were trying to get to the bathrooms.

Broom goes on to describe posted rules of using the library that include the following "disallowed" behaviors: stalking patrons; using or exchanging drugs; bathing; shaving, washing up, or washing clothes in bathroom sinks; bad smells; oblivious  transmission of germs or excessive coughing; preaching or forcing your ideas on others. Also disallowed: weapons and shopping carts. "Most of these things still happened anyway...The library staff spent much of the time policing, which made it hard to get research assistance".
Any library worker in public service can relate to this. Too much of our time is devoted to policing behavior. Many administrators, as well as library users, are unable to understand our work as anything beyond study hall monitors. We actually would prefer to help people with research rather than spending our time explaining how to use a photocopier, refilling printer paper, or (most recently) incessantly reminding people to wear their masks above their nose.
Find out more about Sarah Broom at https://www.sarahmbroom.com/
Posted by YearofBooks at 6:33 AM No comments: