Anywhere But Here - by Mona Simpson 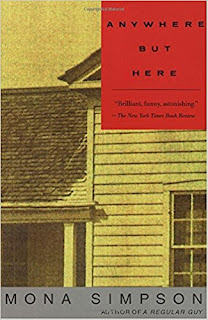 Set in the 1970s Simpson's story tells of an aspiring teen actress (Ann), who leaves her home in Bay City, Wisconsin, along with her flighty mother (Adele) to find their way in Beverly Hills. Adele's inability to hold a job for very long, and her obsession with finding a husband make for a difficult journey to stardom. When Ann finally does get a break Adele attempts to sabotage it.

Not a very library-centric book, but Ann and Adele do use the public library a few times, and Adele also suggests that Ann go school early one day to study in the library instead of riding in with her classmates. Not surprisingly Ann (a rather mediocre student) declines this advice in favor of hanging out with her friends until her first class.

In perhaps one of the craziest uses of a public library I've read about, Ann's grandmother (Lillian) relates a tale of a man she knew who performed surgery on himself, in the hopes of making himself better looking.


...this man found a way to sneak into the public library at night...he was afraid for people to see him - and read up all about plastic surgery. He wanted to remake his face to be better. He got hold of needles and suture somehow and from studying these books he changed himself. I suppose he used mirrors to see. He said it took months, most of the winter. He had to wait for one part to heal before touching another. And he did it. Well, you can imagine the ruckus...it was a miracle the man hadn't killed himself...there were no infections, only clear, healed scars...There was a write up with a picture in the newspaper and a couple other doctors came to see. But it all died down, because the truth was, he still had such an ugly, ugly face.

We'll file this under "don't try this at home, folks."

So Very Many Books!

I wasn't surprised to find that I'd already read more than a few of these 100 Must Read Books about Libraries and Bookstores. Many can be found on this blog. Looks like there are plenty for me to add to my list, though.
Posted by YearofBooks at 11:00 AM No comments: