A Year of Living Prayerfully - by Jared Brock 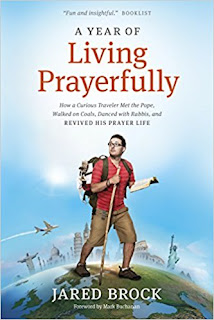 Our One Book One Community (OBOC) steering committee is looking for a light-hearted book with a spiritual theme to read next spring. We had a suggestion of Religious Literacy: What Every American Needs to Know - And Doesn't by Stephen Prothero which I started to read, and do like, but I am not sure it is a good choice for a community read. Our community likes to read stories, and Prothero's book is not only not a "story" it is also rather didactic (as the title would suggest). These are two things that make the book a less-than-ideal choice for OBOC. With this in mind I started to look for other books - specifically something with a plot. Then I remembered that during my "Year of Reading 'Year of' Books" I read two religiously-themed humorous books that were about spiritual quests: The Year of Living Biblically by A.J. Jacobs; and My Jesus Year by Benyamin Cohen. I correctly surmised that more such books must have been written the last few years and selected Brock's book as one that had potential for OBOC. Brock's story features a genuine inquiry into what prayer means. He travels across the globe, often with this wife, to talk to religious leaders about their own spiritual journeys and ultimately finds more questions than answers.

As a Unitarian Universalist I respect and support each person's search for truth and meaning (see our fourth principle). I was intrigued with Brock's quest, and especially appreciated his final comments regarding having more to learn


After an intense year of learning about prayer from some of the best sources on earth, I don't feel like I'm further along. If anything, I feel like a first-year university student-I now know all the things I don't know-all the things I haven't yet learned, understood, or experienced. I am not, in any way, a prayer expert. I'm a failing student who's playing catch up, at best. Rather than coming to the end of a journey, I've only just begun.

As he continues his inquiry I hope he branches out beyond Judeo-Christian traditions. His interactions with Muslims were limited and I don't recall him meeting with any imams. Nor did he talk to any Buddhists (he did meet with one who had converted to Christianity) or Hindus. Likewise, his dealings with women religious leaders were rather narrow. I think the woman with whom he had the longest conversation was Rachel Phelps-Hockenbarger, daughter of Fred Phelps of the infamous Westboro Baptist Church. I have to give him credit for his perseverance in getting the interview, though.

Brock's travels took him to, Israel, several parts of Europe, his native Canada, the United States, and also to North and South Korea. I was impressed with his courage in voyaging to North Korea, and his refusal to bow down to the body of Kim Il-Sung. There were no visits to any African or Latin American countries, however, and I suspect that if he had spoken to someone in Central or South America about liberation theology, or talked to anyone in Africa about colonialism, or attended a religious ceremony on an Indian reservation in the United States, he might not have simply and naively accepted the comments he found in Christianity Today that


Missionaries brought about reforms, fought colonialism, taught people to read, and rallied support for struggling peoples around the world. The conclusion the article makes is striking: "Want a blossoming democracy today? The solution is simple-if you have a time machine: Send a 19th-century missionary."

I was, of course, glad to see that he began his globe-trotting voyages at his local library. On page one Brock tells us


Michelle and I decided to live prayerfully for an entire year. It was a nice, shiny idea. But where should we start?

With For Dummies, obviously. I borrowed a copy of Christian Prayer for Dummies from the library.

After reading a bit of the work though, he found himself unimpressed and


called it quits, returning the book to the library, where [he] assumed it would remain until next year's Friends of the library book sale.

He also visited the library at the Monastery of Vatopedi (and even borrowed a book there) and while on Mount Athos talked to Father Philotheos who, when asked to define prayer, responded


Prayer isn't one thing...You can read a whole university library full of books that have been written just on the Jesus Prayer.

Brock made at least one other attempt to visit a library while on his journeys. Sadly, however he found the library (and the museum) at Monte Cassino closed (this after he paid his entrance fee). The gift shop, however, was open.

Ultimately, I think I will keep up my own search for a One Book One Community read and look for something that explores religion beyond what one will find in the Judeo-Christian traditions.

Posted by YearofBooks at 7:32 AM No comments: