Pura's Cuentos: How Pura Belpré Resphaped Libraries with her Stories

In honor of Día of los libros/Día de los niños I read yet another book about Pura Belpré, New York City's first bilingual librarian. Bright illustrations of coquí frogs, mangos, mice and cockroaches show how the stories about Puerto Rico are just as vibrant as the stories of New York City with its fabulous music and dance scene.

Pura knows, too, that stories that are not written down can be just as exciting as stories in books, and that stories in all languages should be told. Everyone has stories to tell and hearing other peoples' stories will make us all richer.

Written primarily in English there is Spanish vocabulary sprinkled throughout. A story for all about stories for all.

Libraries change lives. The books we read, the people we meet, the physical space, the programs all create the magic, and community of the library.
When indifferent library worker Aleisha finds a reading list inside of a returned book she not only changes her own life by reading the eight books, she begins to make a difference in the lives of some of the other library patrons as well. Most notable among these is recently widowed Mukesh Patel, who has yet to return the long-overdue book his wife last read The Time Traveler's Wife. Although Mukesh was never much of a reader, his late wife Naina was an avid reader and library user. Through the magic of books (and the library) Mukesh finds a new connection with his beloved granddaughter Priya. It turns out they both love Louisa May Alcott's Little Women and Mukesh begins to think about everyone who is connected by the books they read.
One of the first things I learned in Library School were Ranganathan's Five Laws of Library Science. Although the rules were written almost a century ago, they remain quite relevant:
Each of these laws is evident in this work about people connecting through books and libraries.
Posted by YearofBooks at 7:17 AM No comments:

The Boy in the Field - by Margot Livesey

In the waning days of the 20th century, siblings Zoe, Matthew, and Duncan discover a stabbing victim left to die in a field, and their lives each take on a new direction, and each finds a use for the library. Teenage Zoe begins dating an Oxford University student. She masquerades as an undergraduate and discussing things such as the Bodleian Library  keeps her from blowing her cover. Matthew, in an attempt to find the perpetrator of the crime, searches for clues in the local papers at the public library. Duncan becomes curious about his birth mother and decides he wants to find her. Zoe suggests he look her up in the phone books at the library. Additionally, other uses of the library are sprinkled throughout the work.

Posted by YearofBooks at 11:45 AM No comments:

The School for Good Mothers - by Jessamine Chan

Bringing together ideas from The Stepford Wives, The Handmaid's Tale, and the movie A.I. Jessamine Chan finds a new way to scare the bejesus out of all of us.

Frida Liu is a single mother trying to co-parent her toddler (Harriet) as best she can with her ex-husband (Gust) and his live-in girlfriend (Susanna). During the Labor Day weekend Frida is unable to console the eighteen-month-old who is suffering from an ear infection. Neither is able to get much sleep over the three days. Frida, at her wit's end, leaves the house, and her daughter unattended, for two hours. The police are called when the neighbors hear the baby's incessant crying. After several months of invasive monitoring, and limited supervised visits with her daughter, Frida is sent to a facility where she can be rehabilitated as a mother. The year-long stay involves learning to parent with a creepy robot surrogate for her daughter, on a defunct university campus.

Mentions of libraries are infrequent and tend to be nefarious in nature. Frida is told not to do research at the library prior to her court hearing, lest she be monitored; the former music and dance library on the prison campus is empty; one mother is being rehabilitated for having allowed her eight-year-old to walk home from the  local library alone (a four-block distance). Frida gets one 10-minute video visit with Harriet a week which take place in the former campus library. Even these become depressing events. On the rare occasions when Frida's phone privileges aren't rescinded and she is able to connect with Harriet, Gust and Susanna, the calls are fraught.

A truly chilling tale for the twenty-first century.

Posted by YearofBooks at 12:09 PM No comments: 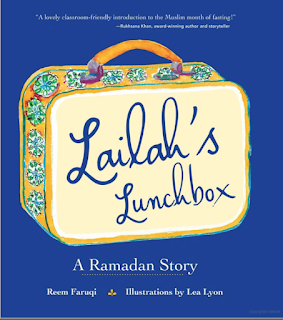 In honor of Ramadan which starts today, and National Library Week, which starts tomorrow, I read Lailah's Lunchbox. In this beautifully illustrated book young Lailah is excited to be fasting for the month of Ramadan for the first time. She is worried, though, that her classmates and teachers in Peachtree, Georgia won't understand why she isn't joining them at lunch. She decides to go to the library during her lunch period where she is greeted by an understanding librarian, Mrs. Carman, who is happy to share the time with her, and to help her gather her thoughts so she can best explain why she is fasting, and why Ramadan is a special time.

Posted by YearofBooks at 3:00 AM No comments: