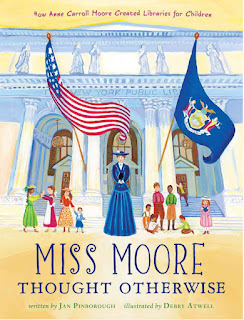 At the turn of the 20th century a young woman named Anne Carroll Moore enrolled in library school and got a job at the Pratt Free Library in New York City. When Moore was growing up children were restricted from using libraries. "People didn't think reading was very important for children - especially not girls." However, Miss Moore thought otherwise. After she was put in charge of all of the children's sections in New York City's thirty-six branches Moore was tasked with designing the Children's room at the new grand library that was to be built at Fifth Avenue and Forty-Second Street. The Children's room was designed especially with children in mind with special furniture, bright colors, and artwork and "new children's books in many languages". Once the room was built music programs, author talks, and other special events kept the children coming back. Her ideas have been adopted in libraries around the world.

Posted by YearofBooks at 8:50 AM No comments: