The internment of Japanese-American citizens during World War II is a chapter of United States history that some would prefer to pretend never happened. I remember finding out about this injustice as an adult, and wondering why it wasn't taught in any of my American History classes in school, or my class on Constitution, Citizenship and Public Issues (CCPI) - a required course for all High School Seniors in Maryland during the 1980s. It is especially baffling to me because while I was taking CCPI there were actually Congressional Hearings about the internment going on at the time. How could it not have been worthy of a class discussion?

In 1942, after the Japanese invasion of Peal Harbor San Diego Public Children's Librarian Clara Breed discovered that many of her most enthusiastic patrons, American children of Japanese descent, were going to be sent to "relocation centers" with their families. She asked them to write to her, providing them with penny postcards, asking that they let her know where they were and how they were doing. From this she began a correspondence with many of the children. She also provided them with books, toys, supplies, and material for making clothes.

Clara Breed saved the letters that the children sent her. In 1993 they were donated to the Japanese American National Museum (you can read some of the letters here), and they are the basis of this book.

The children tell stories of the substandard conditions to which they were subjected (for some their first stop after being evacuated from their comfortable middle class homes was a refurbished horse stable - still smelling of urine). Surrounded by barbed wires and armed guards the camps were poorly heated, and poorly equipped, making for an especially difficult adjustment. Even so, the children's letters are hopeful, and demonstrate strong spirits.

Also included in this work are excerpts from opinion pieces from newspapers at the time. The bigotry is clear. It is also true that some things don't change, although today we are more likely to read such comments as anonymous posts and "tweets".

This work is evidence of librarians' long-time commitment to social justice. One former correspondent explained when he was interviewed for the book that as a "neglected child" Miss Breed introduced him "to the magical world of books". Clara Breed championed the rights of an especially vulnerable population at a time when it was especially un-popular to do so. In an article written for the Horn Book magazine in 1943, Breed tells the story of her young friends. It is interesting to note the stereotypes, albeit positive ones, evident in her article, as well as the language that many will find rather politically incorrect for the 21st century.

I was especially interested to see one of the children wrote to Miss Breed about how much she enjoyed "playing library" and discovering that another one grew up to work in a library.

Interestingly, as I was finishing this book I found out about Allegiance a new musical currently being produced in New York that tells the story of the Japanese-American internment camps.

Posted by YearofBooks at 12:40 PM No comments:

War of the Worlds - the movie 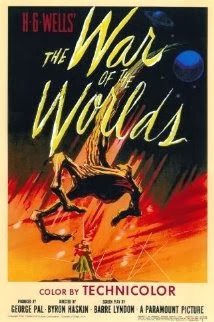 When a spaceship from Mars lands on Earth a scientist Dr. Clayton Forrester (Gene Barry) goes to investigate. One of his fans-Sylvia Van Buren (Ann Robinson), an instructor of Library Science - also heads out to the site. Romance ensues.

When we first meet our librarian she appears sophisticated and poised. However she completly falls apart in the face of an alien invasion and a hunky scientist. Scientist saves the day, of course, while our librarian follows along, screaming (fortunately though her hair spray holds up throughout). We never see Sylvia working as an instructor or a librarian, in fact she never mentions it again after the first time. She is portrayed as a Red Cross volunteer who passes out coffee to the important men doing the real work, and she she does demonstrate some bravery by driving one of the evacuation school buses in hopes of taking some people to a safe area.

This movie was pure 1950s-era camp. We could only laugh at the "highlyscientific" terms like "extreme altitude" and "sonic radar" used by military men with important voices. We were surprised to see one woman scientist, who actually got to speak on a few occasions.
Posted by YearofBooks at 3:41 AM No comments: 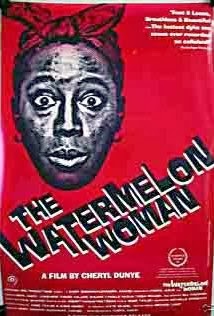 A movie with a more than just a little bit of meta-meta fiction. With Watermelon Woman Cheryl Dunye creates a film in which she documents herself searching for a (ficticious) 1930s African-American actress known as Watermelon Woman. Watermelon Woman's supposed affair with a white director parallels Cheryl's romance with Diana, a white customer in the video store (remember those) where Cheryl works with her best friend Tamara.

There are two librarians in this work. Neither is portrayed in a particularly impressive light. One is a young, rather effeminate, and snotty (both literally and figuratively) male reference librarian who dismisses Cheryl and Tamara after a cursory search in his database. The other is an archivist at the Center for Lesbian Information and Technology - C.L.I.T - in New York City. Everything at C.L.I.T. is stored in uncatalogued boxes. An unnamed volunteer at the archives dumps the contents of a box onto a table and prepares to dump another before Cheryl stops her. The volunteer explains twice in the short scene that C.L.I.T. is run by volunteers and that someday everything will be categorized and easy to find. The volunteer is at both disorganized, and unlike-able.

Producing this movie must have been quite an expensive undertaking. Dunye had to create the grainy black-and-white movie clips of the fictitious films "Watermelon Woman" appeared in. This was a real mind bender.
Posted by YearofBooks at 8:15 AM No comments: 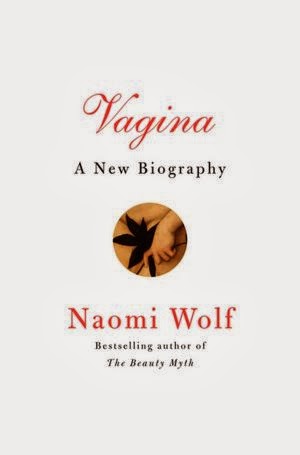 So many puns I could make here - about a penetrating analysis, or a deep look inside - but I really don't want to make light of this serious, fascinating, and well-researched book. Wolf explores the connections between women's sex organs, their brains, and their overall well-being in this comprehensive work. She interviews women about their orgasms, and sexual trauma, talks to sexual healers, and reveals her personal reasons for embarking on this research. She also follows the history of the vagina, and demonstrates how it has been revered, dismissed, and objectified in turn. Many of the things that researchers are "discovering" about the vagina, vulva, clitoris, and uterus today were well known to those practicing the eastern religions of Tantra-ism and Taoism. Both of these religious traditions revere the vagina as life giving, and honor women, as well as their sexual health.

There were only a few times libraries were mentioned in this one, but I think it may have provided the best library laugh thus far as Wolf describes sitting in a university library when she accidentally opens the wrong file on her computer


...scores of students had been silently focused on reviewing their Swinburne or Lawrence. While trying to open a document on my laptop, I had inadvertently pressed "play" on a audio file of an interview I'd conducted with Charles Muir, The American Tantric guru...Suddently, in the silence of the library, a Queens-accented resonant voice had rung out clearly from my computer: "There are trillions of cells in one ejaculate. A typical man ejaculates with so much force that..." Rows of curious faces had swiveled toward me simultaneously. I frantically tried to press "stop," tapping the trackpad over and over, but Muir's confident cadences grew only louder. "And every time he ejaculates..." Finally I seized my computer, and red-faced, carried Charles Muir's voice at a run out of the double doors."

I was surprised at how much I learned reading this. I have always kept a copy of Our Bodies Ourselves on my bookshelf, and have studied goddess traditions. I have seen The Vagina Monologues at least 3 times, in addition to having read it, and own a copy of Joani Blank's Femalia. But as I found out when I read Flow: The Cultural History of Menstruation study of the "lady bits" has been neglected for too long. There is still a lot to learn.


Posted by YearofBooks at 9:03 AM No comments: