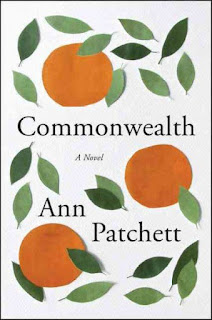 This year I am participating in the Baltimore County Public Library's #BWellRead Challenge which specifies one kind of book to read each month. I grew up in Baltimore County and I got my very first library card from BCPL in the 1970s, so although I now live and work in Massachusetts I am delighted to be a part of this endeavor. So far I've read Mona's Simpson's Anywhere But Here (January) and Beloved by Toni Morrison for February (no libraries in that one). March's challenge is to read a book with a one word title. I found Patchett's book on the Leisure Reading shelf of the Maxwell Library. I assumed it would be about Massachusetts, but it turns out the commonwealth in question is Virginia (FYI Kentucky and Pennsylvania are also commonwealths). And, like Irving Wallace's The Seven Minutes, the title of this book actually refers to a fictitious book of the same name.

This bit of meta-fiction about a blended family in the 1970s with six children is hardly the stuff of the Brady Bunch. Their parents' infidelity is what brings the Cousins and Keating children together and a disdain for their progenitors is what binds them. The novel follows the siblings through five decades. One of them, Franny, lands a job in the law library at the University of Chicago. This is what she refers to as her "real job". She also has an un-real job at the Palmer House restaurant as a cocktail waitress. The waitress job is the one that pays well while the pay at the library "is appalling".

As a child Franny was a heavy library user. She loved to read, forcing her father to make a comment that "It's a good thing there're going to be two lawyers in the family...Somebody's going to have to make the money to buy you all those books." To which Franny retorts "they're free...I check them out of the library."  Her sister Caroline makes a final condescending remark "Well, thank God for libraries".

Franny's stepbrother Albie finds that he can make good use of the public library as a free place to spend his evenings in order to give his sister and her family some privacy while he is sleeping on their couch. He always has a good book to read while he's there thanks to his job as a messenger which often has him delivering manuscripts to publishers. It is through this job that he finds himself with a copy of a novel that is clearly a thinly disguised story of his own family.

I found this work to be a true page-turner, and a perfect vacation read for my spring break trip to Florida. It was especially good for keeping my mind off of the airplane ride. My Florida friend saw that I was reading it and said that she had also recently read it for her book club and generally liked Ann Patchett's books. I will have to look for others.

Posted by YearofBooks at 12:21 PM No comments:

The Night Bookmobile - by Audrey Niffnegger 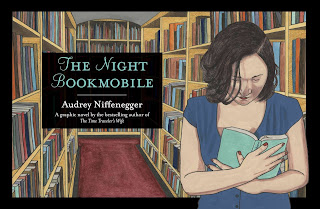 The unnamed narrator in this surreal tale discovers a special mobile library that contains everything she has ever read - not just the books but also "periodicals and ephemera-cereal boxes and such". "It's a very complete collection" the enigmatic librarian, Mr. Openshaw, tells her. She spends a few hours with her books, but as the sun rises Mr. Openshaw shoos her out of the shabby Winnebago that serves as her literary memory explaining that the library's hours are "dusk to dawn". The narrator's obsession with finding the bookmobile again leads to several major life changes for her - including becoming a librarian herself.

A story about the love of books, and reading, and how books hold and become our memories.
Posted by YearofBooks at 7:49 AM No comments: