Miss Smith and the Haunted Library - by Michael Garland

Busting all sorts of stereotypes, librarian Virginia Creeper has blue hair and purple nail polish, and a "high-pitched squeaky voice." She also can truly make books come alive! When Miss Smith brings her class to the library they end up partying with a host of literary monsters including Sleepy Hollow's Headless Horseman, Count Dracula, Frankenstein's monster, and the Wicked Witch of the West. In a scene reminiscent of Jumanji, as Ms. Creeper reads from the Incredible Storybook each of the characters appears in the library.

A not-so-scary book with bright illustrations, plus a cool teacher and a cool librarian.

The book includes a key as to which story each of the spooky characters comes from, in case anyone does want to read a spooky book for Halloween!
Posted by YearofBooks at 5:30 AM No comments:

Biblioburro: A True Story from Colombia - by Jeanette Winter

From author Jeanette Winter, who brought us The Librarian of Basra,is another true story of a librarian who goes beyond the unexpected.

I've blogged about the Biblioburro before (here and here). I did not realize that there was a book about the Biblioburro though (although, really, I should have!). This book relates the story of Luis Soriano; his wife, Diana; and his two trusty burros Alpha, and Beto. Luis' own love of reading and his work as a teacher prompted him to share books with people in remote parts of Colombia, many of whom had no books of their own. This is a wonderful story that demonstrates how librarians are called to their work through a passion not only for books, but for sharing information.

This book's brightly-colored illustrations also give it an authentic Latin flair.

Posted by YearofBooks at 12:16 PM No comments:

The first time I read Orwell's book was at the start of its titular year, as a requirement for a course I was taking that year in college - Literature and Social Change. The class was team taught by a Psychology professor and a Spanish professor who did an excellent job of getting me to think critically about the book and to see how Orwell was not so far off the mark. It was during the Reagan administration and I remember clearly how the media reported that his administration was going to change the way it counted the unemployed so that people who had been out of work longer than six months would no longer be considered, even if they were still looking. Then the country rejoiced when the government was able to report that the unemployment rate went down for the first time in many months. It was stunning. Reading 1984 twenty-nine years later of course I only see more parallels to what Orwell predicted and what is happening.

I wasn't surprised when news broke over the summer that the NSA was spying on citizens through the collection of metadata on cell phones. I didn't even understand how anyone could be. That the government was keeping these kind of tabs on us was all made perfectly clear when the USA PATRIOT Act was first passed in 2001. I cannot tell you how many times I heard people say things like 'if you've got nothing to hide, you've got nothing to worry about' or 'as long as we are all safer, what does it matter.' I wonder what those folks are saying now?

While cleaning up my e-mail recently I found a link to this video  which I had sent to myself over the summer and forgot about. It was just chance that I ended up watching it while I was reading Orwell's book. The connections between what the video shows us about the level of surveillance on citizens and what Orwell wrote about are uncanny. There isn't really anything subtle about the spying of citizens in London, or the U.S. The video is about 32 minutes long. At about 16:30 we see a U.S. official being asked questions about NSA collecting data on citizens: each one he answers with an uncatergoric "No". Early on in the video we also find out how smart cameras are used to track "unusual movement" and "mark" people. One of the developers of these cameras is the aptly named James ORWELL of Kingston University. I had to listen twice to the name to be sure, and then I Googled him. Yep. Orwell.


A Party member lives from birth to death under the eye of the Thought Police. Even when he is alone he can never be sure that he is alone. Wherever he may be, asleep or awake, working or resting, in his bath or in bed, he can be inspected without warning and without knowing that he is being inspected. Nothing that he does is  indifferent. His friendships, his relaxations, his behavior toward his wife and children, the expression of his face when he is alone, the words he mutters in sleep, even the characteristic movements of his body, are all jealously scrutinized. Not only any actual misdemeanor, but any eccentricity, however small, any change in habits, any nervous mannerism that could possibly be the symptom of an inner struggle is certain to be detected.

In one passage our protagonist, Winston, gets his hopes up that the proles are creating an uprising against the Party, only to discover it is instead women fighting over cooking pots at the market


a mob of two or three hundred women crowding round the stalls...with faces as tragic as though they had been doomed passengers on a sinking ship...It appeared that one of the stalls had been selling tin saucepans. They were wretched, flimsy things, but cooking pots of any kind are always difficult to get. Now the supply had unexpectedly given out. The successful women, bumped and jostled by the rest, were trying to make off with their saucepans while dozens of others clamored round the stall, accusing the stallkeeper of favoritism and of having more saucepans somewhere in reserve. There was a fresh outburst of yells. Two bloated women, one of them with her hair coming down, had got hold of the same saucepan and were trying to tear it out of one another's hands. For a moment they were both tugging, and then the handle came off.

I can almost believe that Orwell had some sort of supernatural power to see into the future when I compare this passage with the infamous Walmart Waffle Iron Riot of 2011.

It is not just the parallel of the riot over cheap kitchen gadgets that strikes me here, but that the people in the video are indeed falling in line with expectations. Lining up to get in to a store in Black Friday is just what the "Party" wants from its proletariat. Very shortly, as the holiday season cranks up, we will start hearing stories (from our "liberal" media) about how consumers (a.k.a. U.S. citizens) are disappointing the "Party" (a.k.a retailers) by not spending enough money. After all, it is our duty to consume for the good of the economy.

There really aren't libraries or librarians in this work, per se, as it is a work about information loss. What we do see is a lot of irony in naming of the various Party ministries and departments. For instance "reference clerks" were those who were tasked with "draw[ing] up lists of books and periodicals which were due for recall. There were the vast respositories where the corrected documents were stored, and the hidden furnaces where the original copies were destroyed."

The Records Department, a branch of the Ministry of Truth, provided all information, and entertainment everyone on every level. There was no free press, the government controlled all information. This is eerily familiar for those of us who, in past weeks, tried to get onto government websites. Virtually all federal government websites were inaccessible during the recent government shut down. I found this aspect of the shut down particularly egregious as the websites were already up, someone had to go to the trouble of taking them down.

Books are produced by the Party for the "proles." Winston's girlfriend Julia, who works for the Fiction Department, explains how they are produced - her particular specialty is pornography


It (Pornosec) was nicknamed Muck House by the people who worked in it, she remarked. There she had remained for a year, helping to produce booklets in sealed packets with titles like Spanking Stories or One Night in a Girls' School to be bought furtively by proletarian youths who were under the impression that they were buying something illegal...'ghastly rubbish. They're boring really. They only have six plots, but they swap them around a bit'.

Julia also is a (phony) member of the Junior Anti-Sex League. The description of the sash tied around the waist of her overalls that identifies her as such caused me to wonder if the "True Love Waits" chastity program (with its telltale "purity rings") used 1984 as a "How To" book.


I close my post with this thought from Winston's illicit diary:


"If there is hope it lies in the proles"

Come and get me Big Brother. 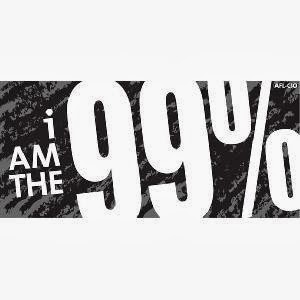 Posted by YearofBooks at 8:55 AM No comments: