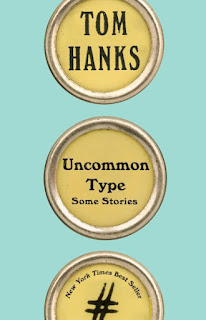 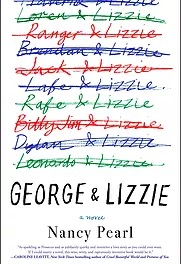 Even if there had been no libraries in this book, it would still get a post here for being written by the librarian's librarian Nancy Pearl. However, there are, unsurprisingly, dozens of times libraries are mentioned in this work.

James and I took the train into Boston in September to hear Pearl read from her new novel at the Boston Public Library, and bought a signed copy. She was happy to pose with me for this un-selfie (James took it) and specifically inquired "Are you a librarian?" (with a smile) when I asked her if she minded taking her picture with me.

George & Lizzie is not your typical love story. While tales of opposites attracting (in this case an optimist and a pessimist - George and Lizzie respectively) are not unusual, George and Lizzie have a lot more going on. Lizzie has two big secrets that she's keeping from George, as well as a host of other issues that stem from her unusual childhood - having been raised by her aloof Behavioral Psychologist parents Lydia and Mendel. Lizzie is bemused by George's desire to help her see the world through a lens of hope, but pushes back at every turn.

George's optimism ultimately makes him famous on the public-speaking circuit.

in George's world there were no tragedies; rained-out picnics, famine in China, lost library books, monsoons in Bali, divorce, children drinking at ten, mainlining heroin at twelve, and dead at fifteen...In his world there were no irretrievable bad choices or wrong turns. Each one was, instead, an Opportunity for Growth...

The next time I hear a student complain about having to pay I fine I will remind them that it is simply an opportunity for growth...


Lizzie is a library user from a young age. She liked the little library at her kindergarten where "Lizzie's whole class went for an hour two mornings every week". Lizzie's parents insisted that Shelia, her babysitter, take her on outings to "ballets, museums, libraries, operas, theaters, and planetariums" rather than places like the Bowlarama. I would suggest that there should be room in a child's life for the Bowlarama and its ilk along with the the more culturally entertaining places. Libraries, of course, are fun, and Shelia helped make them so by checking out books "that she loved when she was Lizzie's age". Shelia also took Lizzie on four-leaf clover hunts. "Lizzie never met anyone who could find four-leaf clovers like Shelia could". This is probably only because she has never met me! My prowess for finding the rare vegetation has led me to deem myself "The World's Greatest Four-Leaf Clover Finder".

Something Lizzie and I have in common is that we were both born on a Wednesday. Lizzie found the poem "Monday's child" in a library book and after reading it understood was why she was "full of woe". I remember reading that poem for the first time, and my father showing my brother, sister and I how to use the perpetual calendar in the phone book to find out what day of the week we were born on. Like Lizzie I was rather displeased with my lot. As Lizzie realizes it would have been better to have been born on a Tuesday or Friday.

One of Lizzie's favorite library books was Bonny's Boy about a cocker spaniel and "after searching for years, she finally found herself a copy at a book sale run by the Ann Arbor Public Library".

As a high schooler she goes to the library to read up on football in preparation for something she refers to as "The Great Game" - a game which ultimately becomes one of her big secrets. She also read a lot of teen romance novels from the library where she learned about dating, but was also left with a lot of questions about sex.

In college Lizzie uses the UGLI (Undergraduate Library at the University of Michigan Ann Arbor) to study with her boyfriend Jack (who becomes her other secret) and then takes a job there there "shelving books, all of which looked frightfully uninteresting" in an attempt to take her mind off the fact that Jack left for the summer and seemed to have forgotten about her. In fact, he never returns to school. Jack's "ghosting" of Lizzie is what makes her use of the library as an adult so pathetically sad. Although Lizzie tells George she does "nothing much" with her days, the truth is she spends them at the library "trying to find Jack using the public library's collection of telephone books". Traveling with George provides her with opportunities to visit other libraries and look at their phone book collections as well. Of course today Lizzie could probably reconnect with her old flame within seconds by searching for him on Facebook, or Googling him, but George and Lizzie's story takes place in a magical time called the nineties, a time when a public library's phone book collection was well used. I know because I worked in a public library in the 1990s. We would field calls from people all over the country asking if we had a phone book for a certain city, and if so they'd ask us to look up a phone number for them.

James and I read this out loud together. It was a good read aloud for us as we reminisced about the nineties, and laughed out loud. It also had regular breaking points so we were always able to find a stopping point.

A must-read for all librarians.
Posted by YearofBooks at 11:01 AM No comments: