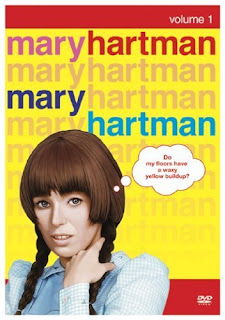 Back in the mid 1970s, two soap opera spoofs aired that pushed the limits of parody. Soap was a weekly, prime time show that my whole family enjoyed watching. Mary Hartman, Mary Hartman really went a step further, a daily show that aired during a regular daytime drama slot. The show, however, was far from regular. The usual melodrama found on a soap was compounded and all sets, characters, and scripts were exaggerated. The title character, played by Louise Lasser, represented a suburban housewife in a blue collar family who, in addition to facing the usual stresses of marriage and raising a pre-teen daughter, also confronts the challenges of a mass murderer in the neighborhood, an exhibitionist grandfather, and a host of other problems.

The show is really quite sophisticated in its humor, and without a laugh track the audience is left on its own to figure out what is funny. Exaggerations and stereotypes comprise much of the farce. Re-watching the show now, four decades since it first aired, I commented to my husband that the sets look less like they were created in the '70s and more like they were created in the '90s to look like the '70s. That's quite a trick! Librarian stereotypes are, of course, some of my favorite things to write about, and this show managed to represent two different librarian clichés over two episodes. Episode five ends with our heroine receiving a phone call from a short, bespectacled, older, bun-headed, shusher-type (Iris Korn) informing her that the books she wanted had come in. She goes on to read the titles out loud, all of which fall along the lines of  'Your Orgasm and You', and other sexual self-help titles. The start of the following episode finds Mary arriving at the library to find a rather effeminate male librarian (Ken Olfson) behind the desk. She asks to speak to the "lady librarian" but is informed that she has left. While Mary pretends that the stack of martial aids that were set aside are not really for her, the librarian pretends that he simply cannot check them out to her since they were set aside for someone else. Ultimately Mary manages to wrest the books away from the library and bring them home, where they almost become another character in the story. Mary's husband Tom (Greg Mullavey) is embarrassed when a friend from work notices the books in the kitchen. Tom confronts Mary about them, and is incensed when she doesn't immediately return them from whence they came.

There is practically enough material here to write an entire Master's Degree thesis.

There are two more discs of episodes coming to my mailbox from Netflix. If there is any more drama about libraries or library books you will find out here.

Stay tuned...
Posted by YearofBooks at 10:44 AM No comments: 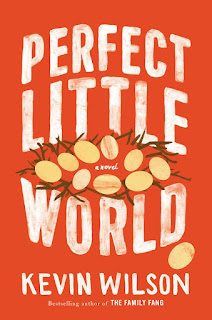 Nine couples, all of whom are expecting their first child, as well as a single expectant mother, Izzy, are chosen by Dr. Preston Grind to be the guinea pigs for the Infinite Family Project. All ten infants are to be raised collectively in a communal living situation, with all 19 parents having equal responsibility for all of the children.

The people who comprise the Infinite Family Project are well aware that they live in a bubble. Bubbles, of course, are formed by tension, and those who live and work in the Infinite Family Project are no strangers to tension. The seemingly infinite number of interpersonal relationships are enough to begin with, add to that tensions around parenting issues when 19 parents are involved, and the inevitable sexual tensions, it is a wonder that the bubble doesn't pop sooner than it does.

Of course one cannot have a "perfect little world" without a library, and the Infinite Family Project does meet this specification. And, in fact, the Chattanooga Public Library plays a role in putting the Family together in the first place. It is where Dr. Grind's assistants meet and interview the Project's potential participants. There are childhood library memories woven into the story as well.

One of the benefits to joining the Infinite Family Project is that all participants receive full funding for educational tuition or job training. One member of the Family, Nikisha, opts to use this perk by getting a Master of Library Science degree from Middle Tennessee State University. Ultimately, she becomes the library director at Rhodes College.

Like the characters in Wilson's The Family Fang the members of the Infinite Family realize that they live in a surreal world, and are not quite sure how to contextualize it. Nevertheless, they manage to make the best of the situation, even when things turn out to be less than perfect.
Posted by YearofBooks at 12:42 PM No comments: