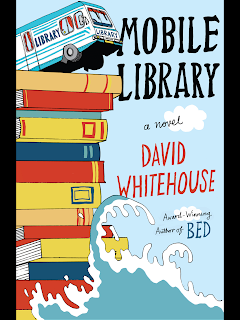 Mistreated by his father, and missing his only friend Sunny, Bobby takes off on a road trip with Val Reed and her daughter Rosa in a recently de-commissioned bookmobile. Val had been charged with the weekly cleaning of the Mobile Library and allowed Bobby and Rosa to come with her while she worked so they could read books (and take some home, as long as they brought them back). As she works, Val explains to the children that not all mobile libraries are trucks; in some parts of the world they use animals. In Kenya they use camels and in Zimbabwe they have a library cart pulled by a donkey and in Thailand they use elephants. Val also explains that in Norway they have a library boat that "can take the books to all of the old people who live on little islands" (see my post on Swamplandia! for a fun library boat read) and more about book mobiles can be found here.

Val makes clear to Bobby that she is not the librarian, although she wishes she were. She does tell a gas station clerk that she is the librarian when he questions her about driving the big truck "I wouldn't make much of a truck driver with these little, feminine arms, now would I?" she offers by way of explanation. Neither is she afraid to shush like a pro those who say inappropriate things.

When Val learns that the mobile library service has been stopped "because it costs too much money" the she decides to take the children off on an adventure, disguising the truck with some stolen paint. Val's biggest concern with the closing of the mobile library was the loss of  "the stories...[and] discoveries they had made in them...they had cheered a victorious hero and willed a villain's comeuppance...Parts of themselves they'd never noticed absent, concealed in the ink on the page". Bobby likewise had pangs of missing the library even before it closed.


Despite the many ways his imagination had been opened up by the mobile library, he could not imagine wanting to be anywhere else, with anyone else. The mere thought of it filled his bones with the inexorable ache of yearning.

In addition to missing his friend Sunny Bobby is also missing his mother, who left the family some time before. Bobby had been collecting pieces of his mother's clothing, hair, and other relics so that when she returned they would be able recreate everything just as it had been. Bobby considered himself his mother's archivist, and kept his files hidden under his bed. They are the only thing he takes with him from home when he starts on his grand adventure.

There are a lot of references to other works (mostly children's books) both subtle and overt in this one.
Posted by YearofBooks at 7:34 AM No comments: 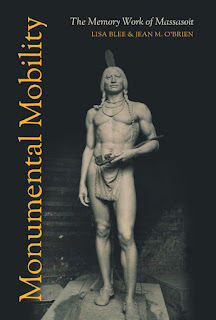 I read this for a faculty book discussion at the university where I work. It has local interest as the original statue of Massasoit (8sâmeeqan) is located on Coles Hill in Plymouth, Massachusetts about 20 miles from the university. Created by artist Cyrus Dallin in 1921 to commemorate the 300th anniversary of the landing of the Pilgrims, replicas of the statue can now be be found in Dayton, Ohio; Kansas City, Missouri; Provo Utah; Springville, Utah and on the lawn of the Howard B. Lee Library at Brigham Young University (BYU), where students refer to the monument as "the naked Indian" and are scandalized over that fact that 8sâmeeqan doesn't adhere to BYU's dress code. One student with whom the authors spoke suggested that the statue be moved near the gym "to align with student-athletes in their sometimes-skimpy BYU-issued gym shorts". However, the student also pointed out that such a location "could be interpreted as the rival university's 'Ute' mascot and serve as target practice...".

The original statue was commissioned by the Improved Order of Red Men, a fraternal organization still in existence and "limited to physically, mentally, and morally sound" white men. Its headquarters are located in Waco, Texas, and the authors made good use of its research library there. The Red Men Museum and Library also owns some 11-inch replicas of the statue commissioned as a fund-raising effort just before the statue's unveiling.

It was certainly an interesting time to read and discuss this book, not only because we are now recognizing the 400th anniversary of the Pilgrims' landing, an anniversary celebration that has been in the works for many years, and will now take place virtually, but also because we are witnessing the destruction of monuments to colonizers, and taking part in a larger discussion of the meaning of monuments to those who build them, those who visit them, and those who remove them.

The final chapter of the book "Marketing" explores how the statue has been exploited, along with other memorials, to make Plymouth a tourist destination - America's Hometown (and I know some Washingtonians who would dispute that moniker). The authors describe several tours available to tourists, some that provide a Pilgrim-centric view, and others that "challenge...expectations for a celebratory settler origin story." The traveling exhibit Captured! 1614 opened in 2014 in the Plymouth Public Library.

Created under the guidance of Mashpee Wampanoag Paula Peters with a team of Wampanoag designers, researchers, and historical interpreters...the exhibit panels and series of short films...Captured! 1614 presents the Patuxet Wampanoag perspective on the slaving expedition of Thomas Hunt, who seized twenty men and boys from Patuxet, including Tisquantum...for sale in Spain...According to Peters, the reception of the exhibit has been overwhelmingly positive among Wampanoag communities and non-Indian viewers.

Excellent scholarship written for everyone.

Posted by YearofBooks at 6:30 AM No comments: