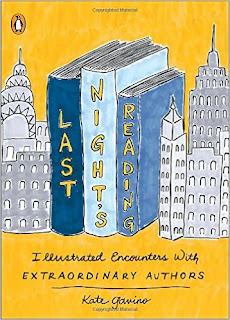 I follow author Junot Diaz on Facebook. A recent post of his featured a drawing of himself by Gavino along with a quote "Every time someone gives you a formula for what you should be, know that it's basically a pair of handcuffs". From this post I learned about the passion I share with Gavino: book readings. Some years ago I wrote an essay called "Rubbing Elbows with the Authors" for the Internet Review of Books. The essay tells of how much I enjoy going to book readings by authors (both the famous, and not-so-famous). The essay has since been removed from the IRB but it can be found here. Gavino's work is a quick read based on her tumblr account featuring drawings of authors she has heard reading their own works. When she attends a reading she doodles a picture of the author and adds a favorite quote. She and I both know that readings are generally free entertainment, and a cool way to meet famous people without the huge crowds. This was especially fun for me to read. I felt like I was playing a game finding drawings of authors I've read (Lois Lowry, Marjane Satrapi, Carl Hiaasen, Margaret Atwood, Isabelle Allende, Laurie Halse Anderson, Edwidge Danticat, Maya Angelou, Chuck Palahniuk, Jeffrey Eugenides, George R.R. Martin. John Green, Elizabeth Gilbert  and (bonus!) even some that I've met myself Tiphanie Yanique, David Sedaris, Janet Mock).

I got a bit emotional reading this book. Listening to books being read aloud tends to make me cry a little bit. Apparently so does reading about readings.

So, here's hoping that  I will be able to meet Gavino someday. Hearing her do her own reading would make this truly a meta experience. I've never tried my hand at drawing author's portraits, but if I  meet her I will give it my best shot.

Everything Matters! - by Ron Currie, Jr. 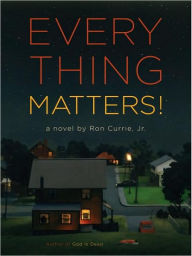 What would you do if you knew the exact date and time the world would come to an end? Who would you tell? When? Why? and How? These are the questions that trouble Junior Thibodeau, who has known since before he was born that a comet would hit the earth during his 37th year and obliterate all life. His knowledge of this haunts him and leads to problems with drug abuse and alienates him from his family and his girlfriend. The chapters are told in the first person from alternating perspectives of Junior, his family members and other acquaintances, with occasional interruptions of the omniscient "voice" that Junior hears telling him things about the past, present and future, sometimes simply providing information, other times offering advice that he sometimes takes and sometimes doesn't.

Junior uses the library several times on his way to doomsday. He does research on how to cure his father's lung cancer and takes his young daughter Ruby to the public library where she learns about the fragility of the environment and has her own existential crisis. Ruby knows nothing about how the world will end. Does it matter?

In addition to the library related passages, I marked another of particular interest to me. Junior's father is advised to go to Brockton Hospital for cancer treatment. This is intriguing not just in the fact that someone living in Maine would be sent not to Boston for world-class cancer care, but to a little-known city just south of it (and just to the north of Bridgewater, where I live). Brockton is a real place, it is, in fact, the city where my daughter was born. And Brockton Hospital is a place that I have received minor surgery (although it is not where I delivered my daughter). I don't think I've ever read a novel that mentioned Brockton before. It was serendipity that I picked out this book to read from my local library. I read the jacket flap and liked that it appeared to have a surreal quality. There was no indication that it might have a bit of local interest.

The Year Dolly Parton was My Mom - the movie 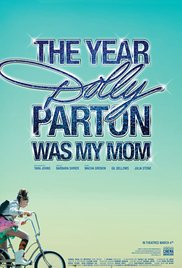 In the spirit of Winona Ryder's Welcome Home Roxy Carmichael  this sweet coming-of-age film features Julia Sarah Stone as eleven-year-old Elizabeth Alison Gray who, upon discovering that she was adopted, sets out to find her birth mother, whom she is convinced is none other than country music star Dolly Parton! In the 1970s one just couldn't Google information so Elizabeth seeks the help of a librarian to find out where she can get her birth records, only to discover that those records are sealed leading her on a quest across the Canada/United States border in search of answers. This is a wonderful feminist film. And it passes the Bechdel Test in spades!

Posted by YearofBooks at 10:03 AM No comments: