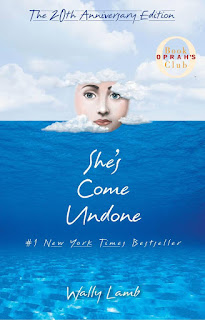 This is the second book I've selected from the Little Free Library on Washington Street in Fairhaven, Massachusetts. It turns out both were choices from Oprah's Book Club. I never participated in Oprah's book club, but back in my public library days I was always aware of what her picks were because people would start calling the library as soon as they were announced to find out if we had them. Anyway, I enjoyed both books I chose (the other was Where the Heart Is by Billie Letts).

In this coming-of-age novel young Delores Price faces a tragedy that eventually tears her family apart. After her parents divorce she is sent to live with her grandmother while her mother recuperates from a mental breakdown, and Delores' life begins a downward spiral. She is obese, and essentially friendless when she leaves for college where more torment awaits her. After several years in a psychiatric ward she tries to strike out on her own, but her pain has not been fully explored or healed.

The copyright on this book is 1992, and the story follows Delores from her childhood in the 1950s through adulthood. All the action takes place before the time of Google, indeed, personal computers were virtually unknown to the characters in this work. Of course that means that they had to go to the library to find things out. Delores is a prolific library user. This is especially evident when she mentions that her school guidance counselor, Mr. Pucci, saw her though "$230 worth of unreturned library books". She doesn't get much better at returning books as an adult.When she takes the feminist classic Our Bodies Ourselves out of the Montpelier (VT) public library she apparently ignores the overdue notices that "begin to appear" along with her bills in the mail.

She takes advantage of the Providence (RI) Public Library's vast collection of telephone books from around the country ("thousands and thousands of pounds of tissue paper pages") to find the address of someone she's been stalking. I guess this is one library service that is no longer needed. Who uses phone books anymore? And it is so much easier to stalk people online as well.

And finally, a first. This is the first book I've blogged about a book that mentioned a hospital library.

The writing is first-rate, and despite Delores' deep cynicism she is someone the reader wants to cheer for. The book really isn't as depressing as my post might make it sound. It has some truly sweet spots.
Posted by YearofBooks at 11:45 AM No comments:

A Field Guide to Lies: Critical Thinking in the Information Age - by Daniel J. Levitin 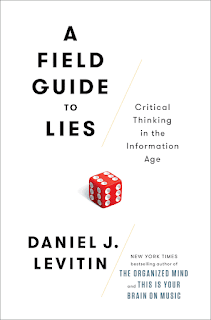 I downloaded this e-book after watching this short interview with the author. Levitan has a lot to say about information literacy and includes chapters on understanding numbers, graphs, and statistics (and how all can be used to deceive); and how to think critically and logically so as to avoid being duped. Crucially, he discusses the importance of doing our own research in order to verify claims we've heard


Time spent evaluating claims is not just time well spent, it should be considered part of an implicit bargain we've all made. Information gathering and research that used to take anywhere from hours to weeks now takes just seconds. We've saved incalculable numbers of hours of trips to libraries and far-flung archives, or hunting through thick books for the one passage that will answer our questions. The implicit bargain that we all need to make explicit is that we will use just some [emphasis in original] of that time we saved in information acquisition to perform proper information verification.

Levitan also makes clear the importance of librarians in the information age. He specifically mentions asking a librarian for assistance in finding the origin of a quote often misattributed to Mark Twain ("It ain't what you don't know that gets you into trouble. It's what you know for sure that just ain't so."). He tells of consulting expert research librarian Gretchen Lieb at Vassar who explained the difficulty in tracking it down explaining that "Quotations are tricky things. They're the literary equivalent of statistics, really, in terms of lies, damn lies, etc." The quote in question most likely originated with humorist Josh Billings.

Levitan also explains about the scientific process, and what peer-review entails. Further he explains that it is becoming more difficult to tell which journals are reputable with the "proliferation of open-access journals that will print anything for a fee, in a parallel world of pseudo-academia". He goes on to say that "Reference librarians can help you distinguish the two" and specifically gives a shout out to Jeffrey Beall, a research librarian at the University of Colorado, Denver who has created a "blacklist" of disreputable journals.

This book was especially useful for me as I am currently researching how to teach students how best to evaluate websites and other open-access sources. In fact, I would recommend this book to all budding researchers (and I know a few experienced ones who might benefit from it as well). It is written clearly with just enough illustrations and was well worth the time I spent reading it.
Posted by YearofBooks at 11:00 AM No comments: