Beyond Words: What Animals Think and Feel - by Carl Safina 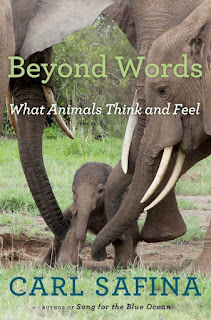 It has been five years since I posted my rave review about Safina's The View from Lazy Point. Like Rachel Carson, Safina writes science for all. His delightful prose is accessible, witty, and smart leaving one with a true sense of wonder. This passage about humans discovering the use of tools by chimpanzees provides a clear window onto his clever writing style

In 1960, Jane Goodall rocked the world with "news" that chimps were using twigs - in other words, tools - to extract termites. Up to that moment, scientists had believed that only humans made any tools, and that tools "made us human." But - wait a minute! In 1844, a missionary to Liberia named Thomas Savage wrote that wild chimpanzees crack nuts "with stones precisely in the manner of human beings." Science did not rediscover the missionary's position for more than a century.

I began reading this book in August on the ferry from New Bedford, Massachusetts to Nantucket on our way to hear Safina give a talk about his work with elephants.

Both the book and his presentation discussed the question of anthropomorphism (the attribution of human emotions to other animals). Throughout much of the twentieth century scientists only observed and reported on the behavior of animals, but did not seek to understand why they (the animals) might do something, or how they might feel about it. In fact, scientists who suggested that animals might have reasoning skills were considered un-academic. Safina, however, pointed out in his talk that "it is not scientific to not be open". And explains in the book " that [b]y banning what was considered anthropomorphic, the behavorists perpetuated the opposite error that only humans are conscious and can feel anything". Safina simply asks animals the question "Who are you?". The answers, however, are complex.

It took me several months to get through this book because although I read it in small chunks there was always so much to digest. It certainly had me re-examining my own belief that animals don't reason. A belief, no doubt, instilled in me by the fact that I grew up in the 70s and 80s, when behaviorism was the science of the day and so any education I received would have reflected that. I was especially thrown by this explanation about the care of baby turtles

in 2014...scientists announce[d] their discovery that hatchlings and adults of a species of river turtle vocalize to one another, using eleven types of calls. The scientists observed that the calls functioned "to congregate hatchlings with adults for mass migration." Had you asked me before I read that, I (and most turtle experts) would have told you-wrongly-that no turtles provide parental care, at all.

The passage made me recall the lesson in my second grade science class in which we learned about how turtles laid their eggs, covered them up, and then left the babies to their own devices when they hatched to find their way to the water. I remember a few years later pointing out to our music teacher when she taught us a song about a mother turtle taking care of her baby that such a thing would never happen.

Safina wraps up this section with a quote from his neighbor J.P. Badkin: "if you're not careful, you can learn something every day."

This is sure to become my new librarian mantra.

Scarce on any actual libraries (the only mention of the word is in a discussion of a the vast scope of elephant noises, which he refers to as a "sound library") Safina's work is included on this blog not so much for this one library metaphor but because the book demonstrates Safina's love of lifelong learning. As a librarian my hope for everyone with whom I interact is that they, too, will develop such a passion.


Safina's Ted Talk "What are Animals Thinking and Feeling" can be found here:

Posted by YearofBooks at 8:41 AM No comments: 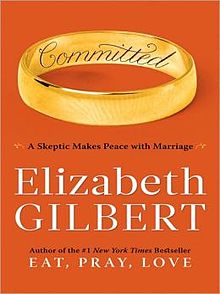 Of course since I look for libraries in books this use of the metaphor would pique my interest more than some other readers. A "thunk" can be a sound for a lot of things, perhaps some rather unpleasant - the thunk of a jail cell closing behind you, or the thunk of a head hitting the floor, for instance. But here it is used as a reassuring sound - a sound you might expect to hear in a library, a place where one feels safe. And I do think that Gilbert and Felipe ultimately feel safe together in their marriage.
Posted by YearofBooks at 9:17 AM No comments: