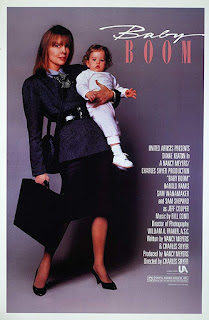 I don't know what made me suddenly remember that this 1987 movie, which I last saw decades ago, had a library scene, but once the realization was made I set out to find it. It is not available on either of the streaming services I subscribe to, so like any good librarian, I requested it from inter-library loan.

Diane Keaton plays J.C. Wiatt a marketing guru who is on the verge of being named partner when she discovers that a distant (deceased) cousin has named her guardian of his baby. When the trials of motherhood begin to interfere with her work, she leaves the firm and moves to a farmhouse in Vermont.

She is about to give up on country living when she realizes that the home-made applesauce she prepares for Baby Elizabeth is a gold mine when properly marketed to Baby Boom parents.  After doing some research at the Bennington College Library she starts "Country Baby" - a mail order business for natural baby food.

I can only imagine what this film would be like if it were made today. There were no cell phones, or internet when this was produced. The few computers we saw in the movie were clunky, and had small black and white screens. The fast pace and need to have everything done yesterday would be exponentially magnified today. It made me all the more happy to work in a library where, while things sometimes get busy and deadlines do loom, I know that things will, most assuredly, slow down again once final exams are over.
Posted by YearofBooks at 7:25 AM No comments:

The Undateable - by Sarah Title 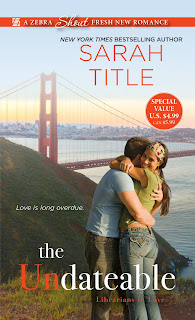 August is Read-A-Romance month, and since I can't resist a good aptonym I chose Sarah Title's book about a young librarian who gains her 15-minutes of fame (or infamy) by becoming a meme - the Disapproving Librarian for this genre challenge.

When her sour puss goes viral Melissa "Bernie" Bernard reluctantly agrees to be part of a makeover project for the online magazine Glaze.com, and to prove that she isn't "undateable" by being set up on 30 dates in 30 days.

With all the requisite allusions to calico, sensible shoes, and cardigan sweaters it is also made clear that Bernie is no shrinking violet. Even as she submits to spending hours trying on "foundation garments" (things I previously only knew as bras and underpants) as well as additional time having her hair and makeup done, we see a person with plenty of agency. And, like any good librarian, she is also an advocate of free speech.

Few of Bernie's dates go well, and any reader will guess early on who she will end up with. Furthermore, it wasn't surprising to this librarian that it wasn't her new fancy duds that ultimately landed her a lover, but rather her brains. Bernie's very first date is an early fail when she discovers that not only does Pete (her date) not read, he's proud of it. I expect Bernie takes seriously John Waters' admonition that “If you go home with somebody, and they don't have books, don't fuck 'em!”
In this case she was able to most efficiently dispatch with the advice by discovering the disinterest in books over dinner. No need to waste time by going home with the guy.

I must admit that I did enjoy reading this. Nevertheless, it is unlikely that I will be reading any more romance novels before next August. So many books, so little time.

Posted by YearofBooks at 12:28 PM No comments:

Email ThisBlogThis!Share to TwitterShare to FacebookShare to Pinterest
Labels: between the stacks, California, romance, stereotype 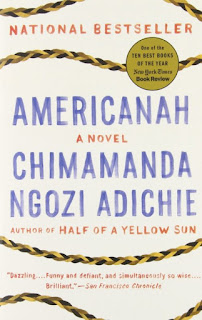 Adichie's book tells the story of Ifemelu, a Nigerian woman who immigrates to the United States, and then, after becoming a U.S. citizen, returns to Nigeria. As a smart, savvy young woman it should go without saying that Ifemelu is also a library user.

Ifemelu and her boyfriend Obinze first use the library only as a place to meet, but she becomes a more active user after she moves to the United States for college. Obinze (an "Americophile") sends her a reading list of American writers he believes she should read. After already having found The Adventures of Huckleberry Finn "unreadable nonsense" she wasn't expecting to find an author she liked, but


She hungered to understand everything about America...Obinze suggested...American books, novels and histories and biographies. In his first e-mail to her...he gave her a list of books. The Fire Next Time was the first. She stood by the library shelf and skimmed the opening chapter, braced for boredom, but slowly she moved to a couch and sat down and kept reading until three-quarters of the book was gone, then she stopped and took down every James Baldwin title on the shelf. She spent her free hours in the library, so wondrously well lit; the sweep of computers, the large clean, airy reading spaces, the welcoming brightness of it all, seemed like a sinful decadence...in those weeks...she discovered the rows and rows of books with their leathery smell and their promise of pleasures unknown...

Well, who needs a man?

Ifemelu is not the only one in this story who uses the library. There are at at least three other characters who are clearly patrons. One of these is Blaine, a boyfriend in her adult years, who not only uses the library, but also defends a library employee at Yale, where Blaine is a professor of Political Science. Blaine is a friend of Mr. White, a "rheumy-eyed" security guard "with skin so dark it had an undertone of blueberries". When a white employee mistakenly suspects that Mr. White is involved in a drug deal and calls the police Blaine organizes a protest after the university responds to the incident with a statement that it was "a simple mistake that wasn't racial at all".

An especially curious passage to read in the summer of "Permit Patty", "Bar-B-Q Becky" and "Coupon Carl".

I think that perhaps Adichie's last mention of the library in this work is my favorite of all time. Ifemelu applies for a research fellowship at Princeton University. When she reads her acceptance, hands shaking, she discovers that "the pay is good, the requirements easy: she was expected to live in Princeton and use the library and give a public talk at the end of the year." All I could think was that the only thing I could think of that would be even better than having a job as a librarian, would be to to be paid just to use the library.
Posted by YearofBooks at 7:47 AM No comments: