The Time Machine - by H.G. Wells

I have seen two movies based on this work (The Time Machine (2002); and Time After Time (1979)). Neither has too much in common with Well's original story; however, the 2002 movie not only shares the exact title, it, like the book, has a library. The movie boasts a librarian as well: Orlando Jones Vox #NY-114. According to the Librarians in the Movies Filmography webpage  Jones Vox is

a very cool virtual librarian of the future who is the compendium of (no less than) All Human Knowledge. He describes himself as a "third generation fusion card photonic with verbal and visual link capabilities connected to every database on the planet." He does a reference interview and even holds story time for kids. We first encounter him in 2030, then later about 800,000 years into the future (although his source of power is never explained).

There is nothing quite so groovy in the book, the futuristic library is only mentioned one time, and there is no librarian in the dusty, deserted place. However, the hallowed space is given a bit of a build up, and is located in a place the Time Traveler calls The Palace of Green Porcelain (emphasis mine). What appears at first to be a museum of archaeology the Time Traveler discovers, to some delight, that it also "possibly" contains "historical galleries; [and] ....even a library!" Which he says "would be vastly more interesting than this spectacle of old-time geology in decay."

I saw Time After Time over 30 years ago, and I remember the gist (Jack the Ripper escapes into the future with H.G. Wells in hot pursuit), but I cannot recall if there is a library or librarian. I have added this to my Netflix list and will update this post, if necessary, once I have watched it again.

A free e-book available at Project Gutenberg.
Posted by YearofBooks at 6:46 AM No comments:

This Is How You Lose Her - by Junot Diaz 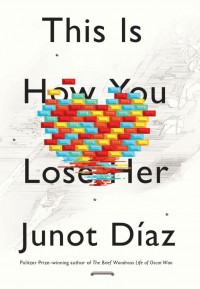 I had high hopes for this collection of short stories, by one of my favorite authors, when I found a reference to going on a date in the library on the second page of the very first first story, and then read about "the nerd every librarian in town knows" only two pages later. I expected then, that the book will be chock-a-block full of libraries and librarians. Alas, it was not to be: these two library references were the only ones.

That is not to say that I did not thoroughly enjoy this work. The stories are original, and the writing is colorful. Those who read Diaz's previous collection of short stories, Drown, will remember the character Yunior, who is the protagonist in almost all of  these stories, except "Otravida,Otravez", the only story told from a woman's point of view. All, however, involve some pendejo (usually Yunior) treating some woman (or women) like crap. The last story, called "The Cheater's Guide to Love", where we learn that Yunior, even as a well-educated, grown man, never changes his ways brings it all together. Those looking for a story of redemption will not find it in this work.

This was the first book I bought through the iBooks store to read on my new iPad. I must say I liked it. It was cool the way I could use the virtual bookmarks, and virtual yellow sticky notes to remind myself what I wanted to write about. And I liked that I could read a popular new book without paying top dollar, or waiting a really long time on the library waiting list. The downside is that it is much more difficult to share this way.


Posted by YearofBooks at 7:41 AM No comments:

A Secret History of Coffee, Coca & Cola - by Ricard Cortés 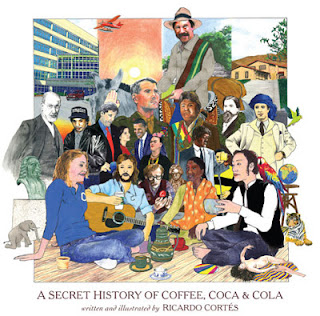 Several years ago my husband James decided to teach a new course about coffee. His idea was to teach students about everything that went into making their daily cup, from the plant, to the labor, to the processing and roasting, to the grinding and brewing. He asked me if I had any ideas for what to call the course. I suggested the provocative title "The Secret Life of Coffee". It has become a rather popular course offering here at Bridgewater State University. Of course, the title of this book immediately caught my eye when I noticed its review come across my desk. Cortés makes connections between the three title plants explaining how and why each has been forbidden in different times and places. The last part of the book explains about Coca-Cola's secret ingredient - "Merchandise No.5" and how Harry J. Anslinger, commissioner of the US Federal Bureau of Narcotics, in the 1930s  helped Coca-Cola  maintain its access to the coca plant, even as it was banned in the rest of the country. Using incredible reproductions of letters and other documents (Cortés recreated them all with his own pen and pencil illustrations) the author shows some remarkable correspondence demonstrating some rather corrupt practices.

Although this work has the look of a child's picture book, it is anything but. Heavily researched with extensive references, Cortés could not have made the book "without the help of librarians, especially of the New York Public Libraries; the National Archives at College Park, Maryland; the Special Collections Library of Pennsylvania State University; the New York Academy of Medicine Library; the Drug Policy Alliance; the Horticultural Society of New York; and the Brooklyn Public Library."
Posted by YearofBooks at 11:17 AM No comments:

How Bad Are Bananas? by Mike Berners-Lee

The subtitle of this book is an ambitious "The Carbon Footprint of Everything". I have to say that Berners-Lee does a commendable job with this, in a book that is just over 200 pages. Even before I was finished reading it, I was ready with facts on several occasions when the topic of climate change came up. The author calculates the footprint in terms of CO2e (carbon dioxide equivalents) based on where things come from, how far they travel, and what kinds of resources they use up. Bananas, by the way, are not bad, as long as they come by to us by boat.

Berners-Lee doesn't write about libraries, per se, but he does calculate the CO2e of a book, which he says needs to be considered "in terms of 'bang for the buck': do the benefits outweigh the impact? To maximize the "bang" side of the equation, you simply have to read this book, talk about it, and pass it around."

Since I checked this book out of a library, and will return it as soon as I finish this blog post, it will be passed on to the next person who wants to read it. I have also already done a bit of talking about it, as well as writing about it. And, in fact, I learned about this book by reading this review from the Center for a New American Dream, so I'd say the "bang" on this book began even before I checked it out. I wonder if I can I take credit for a negative impact on CO2e for having read this book?
Posted by YearofBooks at 7:51 AM No comments:

I recently became the owner of an iPad, and found this book while browsing my library's e-book collection in the hopes to teaching myself how to download them. I failed at the download, but was able to read this online. It was a quick read, but apparently I read it too fast because I was prompted twice to enter one of those codes to prove I was not a robot. My reading was interrupted by a message that the way I was reading was inconsistent with a human reader. What? Turning the pages one by one? I find it especially annoying, ironic, and rather post-modern, that I to had to prove to a machine that I was not a robot. Anyway, I finished the book despite this inconvenience. The book is not much more that what the title says it is. It is just over 100 pages of library-positive quotes from well-known celebrities, authors, United States presidents and first ladies, and some folks who are not so well known, or perhaps only well-known in library circles (e.g. Nancy Pearl "the librarian's librarian"; and Herbert S. White, Professor Emeritus of Library Science).

Catalogers are some of the few
professionals who take pride in being anal.
--Tatyana Eckstrand
--------------------------------------------------------------------------------
One observation I made reading this was that however much librarianship is a female-dominated profession  (over 80% of librarians are women), the quotes in this work were, by and large, from men. At first I thought is was my imagination, but all sources were listed at the end of the book, so I counted them up. This was a count simply based on first names, so although it might not be completely accurate, even taking into account some guessing errors, the proportion of men to women represented is over three to one. I am not sure what to make of this. Do men really say more pithy things than women? Or, is it simply that, as a society, we still pay more attention to them. I remember doing some research in my own library school days, and reading about a librarian from the early 20th-century who pointed out that in her day, if they wanted to see anything accomplished, women just had to let men take the credit for everything. I frankly don't think we've come very far in the last 100 years.

Posted by YearofBooks at 8:49 AM No comments: