Come as You Are : The Surprising New Science that will Transform your Sex Life - by Emily Nagoski 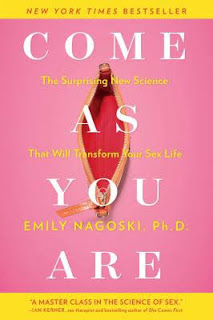 Nagoski weaves stories of real women into the book she has written on the science of sex, and discovering pleasure. The title isn't simply a cute play on words; it is an affirmation. Over and over the author reminds us that we are all "made of the same parts, just organized in different ways." What may seem normal for some (or many) may not be right for others, and there is not necessarily a need to change in order to conform. People have sexual breaks and accelerators; these are different for everyone. These breaks and accelerators can be recognized, and explored, which may in turn increase sexual pleasure. Nogoski uses herself and her identical twin to explain how different people, even those with the same DNA and "grew up in the same house, went to the same schools, watched the same TV shows, and read many of the same books", can end up with "very different maps" in their heads. Nogoski's image of woman as an Ideal Sexual Being came from "women's magazines, porn, and romance novels. Her sister's image, however, was that of woman as "Moral" model - smart girls weren't interested in sex. Both she and her sister were surprised about what they learned about themselves when they started having sex.

Nagoski uses the term "mental library" twice to explain how she organizes the stories women tell her in her brain. She also tells one story in which a client "Laurie" frustrated and feeling pressure because she didn't want sex as often as her husband did sent her husband and her son out of the house "to the library so that she could have the luxury of the house to herself..." Her time alone to reflect allowed to to discover, almost by accident, that feeling pleasure wasn't selfish, and she could allow herself that feeling during sex.


Posted by YearofBooks at 6:25 AM No comments: 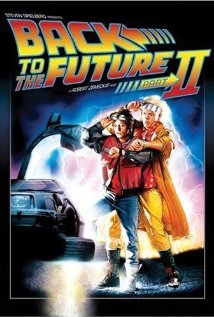 Like so many others yesterday I watched Back to the Future Part II - it was Back to the Future Day, after all. In BttF2 our heroes Doc Brown and Marty McFly travel across six decades. Beginning on October 26, 1985, then on to October 21, 2015, and back to 1985, and finally backwards in time to November 12, 1955. The most important thing that happens in any of this is that Doc Brown uses the Public Library (in 1985) and uses the newspaper archive there to discover that Marty's father had been murdered 12 years prior, and that he (Brown) had been committed to a psychiatric hospital (questions still remain about why that was front page news). Sadly, I must also say that it appears that Brown stole the bound periodicals in order to show them to Marty (perhaps he checked them out, but generally libraries don't circulate archival newspaper), and it is clear that Marty tore the page with his father's story out of the book! Whatever good reason the Doc and Marty think they had for stealing and defacing public property, this behavior cannot be condoned.
Posted by YearofBooks at 5:11 AM No comments: