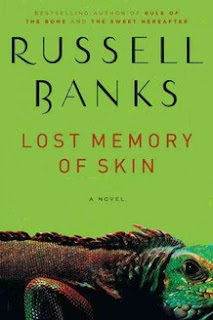 Sometimes I go looking for a book that might be appropriate for this blog, but usually, I just read whatever interests me and then mark any passages that happen to mention libraries. Such was the case for Lost Memory of Skin, and it turned out that I started by marking the very first paragraph of the book, wherein our protagonist, a  level 3 sex offender who is known only as the Kid, goes to a library for the first time in his life. He is vaguely aware that he probably is not supposed to be there, and knows for sure that he is not allowed to go online, so he asks a reference librarian for assistance using the web, the librarian helps him to look up his own address on the sex offender website.When his mugshot comes up, and he realizes the librarian recognizes him, he exits post haste.

It turned out that there was quite a bit more about libraries and librarians in this work, as the novel tells not only the Kid's story, but that of the Professor as well. The Professor, who teaches Sociology at the Calusa State University, is a morbidly obese genius who is not only a library trustee, he is the son of a librarian, and is also married to a librarian (Gloria). The Professor and Gloria have two children, who were conceived in the conventional way, but otherwise the Professor and the librarian have a rather unconventional sex life. This is not the first book I've read about a librarian who actually has a sex life, but it is rather rare that said librarian does much out of the ordinary. I always like to see something that busts the librarian stereotype. And so it was with some chagrin that I read the passage which described the Kid's only visit to the Professor's house. The "comfortably tastefully furnished home" which apparently looked like a "professor's and librarian's" home as far as the Kid was concerned.

So, I began to wonder how this fictitious home stacked up to my real-life-professor-and-librarian home. This is what I found:

Well, perhaps James and I don't really shake any stereotypes here, but I do still feel smug about the fact that our only television set is an older model that, in fact, doesn't get any reception, beyond what we can watch on Netflix.

This may be the first work I've blogged about in which one of the character's is a library trustee. The Professor was elected to the position when he proved himself to have better credentials than the three other candidates. Here in Bridgewater library trustees are elected as well. I do not recall, however, ever having more candidates than there were positions available on the board.

I also liked what the Professor had to say about libraries:

This novel is based on the true case of the men who lived under the Julia Tuttle Causeway in Florida. Sex offenders in Florida must live more than 2500 feet away from any place where children might gather (schools, recreation centers, etc). These men are additionally bound to stay inside Miami-Dade county. The shanty town they built under the highway was one of the few places where they could legally reside. This article from the New York Times tells a bit of their story.

The book closes with the Kid imagining all the things he will do at the public library, once he is off probation.