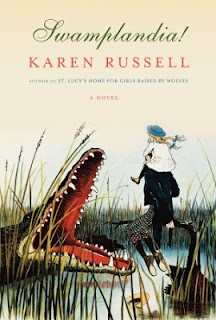 Heaven, Kiwi thought, would be the reading room of a great library. But it would be private. Cozy. You wouldn't have to worry about some squeaky-shoed librarian turning the lights off on you or gauging your literacy by reading the names on your book spines, and there wouldn't be a single other patron. The whole place would hum with a library's peace, filtering softly over you like white bars of light.

If Libba Bray and Carl Haaisen had a baby she would probably be someone like Karen Russell. In Swamplandia! a colorful posse of quirky south Florida characters inhabit a not-quite-magical place for a  wonderfully unpredictable read.

Siblings Osceola, Ava, and Kiwi Bigtree live in Swamplandia!, a tourist trap where their mother, Hilola; and father, Chief Bigtree, put on an alligator wresting act. When tragedy strikes the Bigtree family the three children each end up on a journey that turns out to be more dangerous than any routine dive into an alligator pit.

The Bigtree children are homeschooled with the help of packets sent by the Loomis County Public Schools. Their independent studies are supplemented with books they find on the Library Boat.


...a coppery green twenty-foot schooner at permanent anchor...listing in the rocks...It held a cargo of books. In the thirties and forties, Harrel M. Crow, a fisherman and bibliophile had piloted the schooner around [their] part of the swamp delivering books to the scattered islanders.

The Library Boat remained where it was left after Crow's death "miraculously...unscavaged and undestroyed by hurricanes".

Some of the books on the Library Boat were from its original collection, others were left by other swamp dwellers for a constantly evolving selection of reading material.

It is on this boat that Osceola finds the book The Spiritists Telegraph which starts her on a journey, which in turn leads Ava on another. Their adventures collide in a climactic coincidence, but not before Kiwi begins studying to take the GED in night school on "the mainland" where he uses the Loomis Public Libray


the two-story brick building near the courthouse downtown, with large placid librarians moving through the stacks like human galleons and glass green pots in plants.

It is here that Kiwi researches colleges and does the additional work that earns him a "check plus" from his GED teacher, rather than the simple check mark for credit only. He also uses the public library computers to do the "Reach for the Skies" flying lesson modules in his quest to become a pilot.

A good summer read. Thought-provoking, yet fun.
To learn about a real-life library boat see this video.

Posted by YearofBooks at 6:55 AM