Dewey's Christmas at the Library - by Vicki Myron and Bret Witter 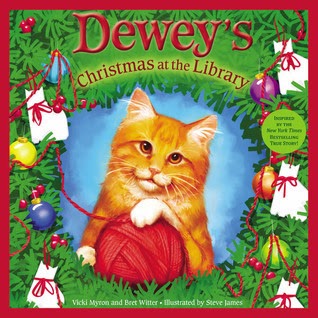 I first blogged about Dewey the Library Cat three years ago during my year of "Celebrating the States" during which I celebrated the anniversary of each state with a movie, a book, and an appropriate food item. For my Iowa book I read Vicki Myron's Dewey: The Library Cat, a book for middle-grade readers about a real cat who was left in a book drop at the public library in Spencer, Iowa. Dewey Readmore Books was subsequently adopted by the whole town. This book was based on the orginal "Dewey" book: Dewey: The Small Town Library Cat who Touched the World. There are several children's picture books about the Library Cat, including Dewey's Christmas in the Library, which I was able to download on my iPad for a mere $2.99. I am a sucker for Christmas stories, and this one was extra special to me, being about a library after all. This story tells about Dewey's first Christmas and how he helped to decorate the library's award-winning Christmas tree. A sweet story based on Dewey's real life adventures.

Posted by YearofBooks at 5:35 AM