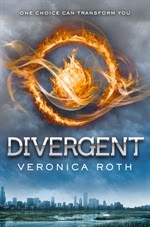 I do see the appeal of this work. A novel for young adults, I imagine that most who read it will want to identify with the "divergents", those who do not easily fit into one category - those who can be selfless, and peaceful, and honest, and brave, and smart. I don't think I will rush out to the theater to see the movie though. Perhaps I will watch it when it comes out on Netflix. I am on the fence about reading the rest of the trilogy.
Posted by YearofBooks at 8:28 AM