Harry Potter and the Goblet of Fire - by J.K. Rowling 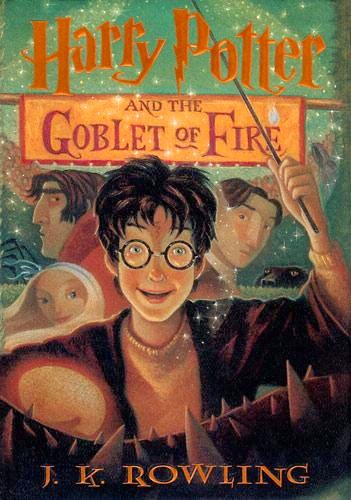 As I have done for the past several years, I re-read one of the "Harry Potter" books in time to blog for Harry's July 31 birthday. I think the fourth book in the series may be my least favorite. It really threw me the first time I read this to find that Lord Voldemort did indeed rise again. And he is really just so mean.

As with the other books, readers will find Harry and his friends using the library quite often for their research. Harry, Ron and Hermione all work tirelessly poring over books trying to find the elusive information on how a person can breathe underwater so Harry can perform the second task of the Triwizard Tournament (even going so far as to asking "the irritable vulture-like librarian, Madam Pince, for help"). Furthermore, students at Hogwarts can't simply "Google" how to perform a stunning hex, you have to look it up in a book. Herminone spends additional time in the library where she researches the history of the enslavement of House Elves in order to start S.P.E.W. (The Society for the Promotion of Elvish Welfare). Hermione's presence in the library turns the brooding Victor Krum (a visitor from the Durmstrang School, and famous Quidditch player) into an avid library user as well. This causes a bit of chagrin on Hermione's part, not because she doesn't like Victor, but rather because he has a fan club that follows him into the stacks, disturbing the scholarly atmosphere. Eventually the library proves to be just the right mood setter for Victor to find the courage to ask Hermione to the Yule ball.

This is still magical even upon the third reading (even if it isn't my favorite).

And, just in time for Harry's birthday : researchers find a correlation between reading HP books, and feeling empathy for marginalized groups.
Posted by YearofBooks at 5:23 AM