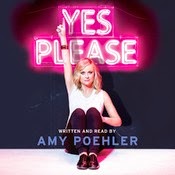 About a month after Christmas was over I found a copy of Poehler's audiobook "hidden" in a drawer in my living room. I asked my husband if he had put it there, and his response was "I wondered what I did with that." It was apparently intended to go in my stocking, but my absent-minded professor sometimes can't keep track of what he does with things. No matter, he and I listened to this together in the car mostly during trips back and forth to our daughter's boarding school (about 30 miles from our home). We wrapped it up yesterday while enjoying a ride on a beautiful spring day in our new-to-us car with the sunroof open.

This is a funny, and empowering book. Poehler tells of growing up in a Boston suburb; her college years; paying her dues working as a waitress while honing her comedic skills; her time on Saturday Night Live, and Parks & Recreation; and her insights into parenting. And, as if all this weren't enough to recommend it, in the final chapter (which Poehler recorded live at the Upright Citizen's Brigade Theater) the author explains a benefit to NOT having information at your fingertips (via cell phones) at all times. Back in the day when you had to go to the LIBRARY to do research, disturbing images would be part of a book or magazine and included "text" and more importantly "context". As an example she relates looking up the Boston Marathon bombing on her cell phone, and the first thing she saw was a photograph of a man who had had his legs blown off. She contrasts this with the image of the naked girl running from the napalm bombs in Vietnam in 1972 which at the time, one would have seen in print, as part of a news story.

This is the first audiobook I've written about in the four years that I've kept this blog. Well done, Amy.

Lagniappe:
There is plenty of librarian fun in Poehler's television series Parks & Recreation. Although she plays an evil librarian Megan Mullally as Tammy Swanson is so funny she is hard to hate.

Lagniappe 2:
Poehler's Facebook page Smart Girls is well worth "liking".
Posted by YearofBooks at 8:55 AM