The Boys on the Boat - by Daniel James Brown 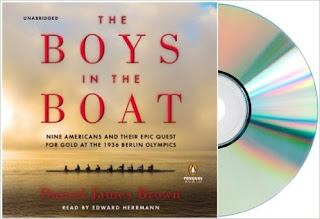 This audio book was loaned to me by a friend, who, like my husband has a passion for rowing. James and I listened to this during a series of car rides to and from our "Whaling House" (our home near the water where James' whaleboat-rowing club meets).

Joe Rantz was one of the members of the United States rowing crew who won the gold medal at Berlin Olympics in 1936. Rantz's story frames this tale, but as a dying Rantz told the author when he was interviewed, the book is not just his story. It is about "the boat...something more than just the shell or its crew...it encompasse[s] but transcend[s] both...something mysterious and almost beyond definition" (from the prologue).

Rantz's story is especially inspiring and the author skillfully spins a yarn about a young boy too often left to fend for himself who learns that in order to win the gold means he must also learn to depend on others.

All the young men on the team were hardworking and we learned a bit of backstory about each one, but the only one (besides Rantz) will get a special mention here. George "Shorty" Hunt was a renaissance man who, we learn, once worked as an "assistant librarian" among many other things.

Alternating with chapters about the team members, and logistics of rowing, was the history of what was happening in Germany prior to the Olympic games. Hitler and his megalomaniac inner circle managed to avoid a boycott of the games through a carefully orchestrated propaganda campaign.

I must also give a shout out to Edward Herrmann, the reader of this audiobook. An excellent voice, with perfect cadence.