The Meaning of the Library: A Cultural History - edited by Alice Crawford

The Millicent Library (the public library in Fairhaven, Massachusetts) looks like a castle (as do the Town Hall, High School, and Unitarian Church). I made my first visit to the beautiful Millicent Library about a month ago, although I have been spending weekends in Fairhaven regularly since August of this year. I spotted Crawford's book immediately as I walked in the building, and remembered that I had recently read a review of it. It became the first thing I checked out of the Millicent Library. Divided into three parts: The Library Through Time; The Library in Imagination; and The Library Now and in the Future each of the 12 chapters was written by a different person on a different theme. I was most interested in the second part as it included chapters on "The Library in Fiction" and "The Library in Film" (a.k.a. on this blog as "'Library' Books" and "Librarians on film", respectively) so I was surprised that it was the chapter on "The Library in Poetry" that I enjoyed the most. I generally don't read a lot of poetry, and I don't think I've seen much library poetry, but I will now most certainly be looking forward to reading Jorge Luis Borges "El guardian de los libros" (The Guardian of the Books) - in the original Spanish, of course; as well as Emily Dickinson's "In a Library". 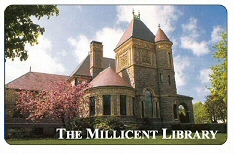 The final chapter "The Modern Library and Global Democracy" was written by recently retired Librarian of Congress James H. Billington. He introduces the chapter by stating that
He points out that even during the Soviet era libraries in Russia "provided refuges for scholars unwilling to become propagandists...preserv[ing] and provid[ing] access both to the memory of Russia's pre-Communist past and to the experience of the post-World War II West." Further he tells of learning from a Native American chief that "long before European settlers brought books to North America, the elder of a tribe would preserve the knowledge of his people in his head the way librarians would later do in their collections. 'But we didn't call him a gatekeeper' [the word Billington used]...we called him the dream keeper". Billington uses this metaphor of "dream keeper" to round out the chapter

Wonder and silence are better for dream keepers than for image makers. Reading can balance our noisy, hurry-up, present-minded world with what Keats called "silence and slow time". Whatever else you do in life do not fail to experience the simple pleasure of being alone with a good book on a rainy day.

Posted by YearofBooks at 8:47 AM