The Station Agent - the movie 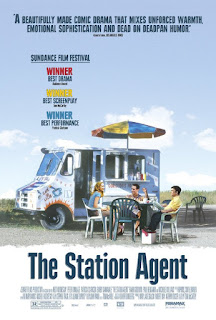 Before Peter Dinklage was Game of Thrones' Tyrion Lannister he played Miles Finch, angry children's book author, in the movie Elf ; and perhaps even lesser known, he was Finbar McBride in The Station Agent.

Train lover McBride inherits an old train depot in New Jersey when his only friend dies. Arriving at his new home he is (reluctantly) befriended by a food truck vendor; a grieving mother; and a young, pregnant librarian with a tosser of a boyfriend.

This is not a film for those looking for an action-packed drama. But if you're looking for a rather low-key, cerebral film about folks who use their public library you are in for a treat.

BTW I have never watched even one episode of Game of Thrones. I read two of the books though, and didn't like them. My reviews can be found here and here.
Posted by YearofBooks at 6:18 AM