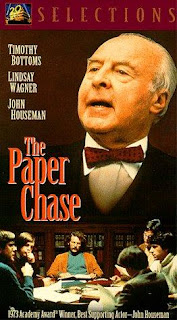 There's nothing like a good library caper! In this classic film, first-year Harvard Law student James Hart (Timothy Bottoms) sneaks into Langdell Library, not once, but twice! The first time it appears he merely wants to get a book when the library is closed, but this sets the stage for the second more daring breach. After he is told by an appropriately dowdy librarian (Irma Hurley) sporting a brown jumper and white collared blouse, that the "red set" (the first drafts of all the law-school professor's writings) is off limits to him Hart and his accomplice, Ford, sneak in to the gated area to read the notes written by their hard-nosed contracts professor Kingsfield (John Houseman) from when he was a student at Harvard. Although I certainly can't condone the behavior of Hart and Ford, I must admit that the librarian wasn't very helpful, and the students do seem to give proper respect and awe to the archives.
Posted by YearofBooks at 9:15 AM