A Knight to Remember - by Bridget Essex 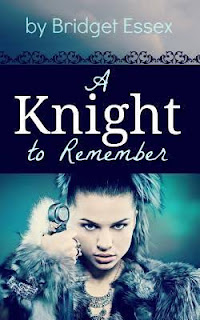 I don't always read romances, but when I do they are about librarians.

One of the tasks in the Book Riot Read Harder 2017 Challenge is to read an LBGTQ+ romance novel. Since I have previously read, and blogged about, a same sex romance featuring men (see my post on Adrian's Librarian), I decided that this year's read-a-romance-month book should be about women.

Librarian Holly doesn't have much in common with her girlfriend Nicole. Nicole isn't crazy about Renaissance Festivals, or Holly's dog, or even (gasp) reading! So when sexy Virago appears in all her knightly-ness to save the world from a supernatural beast it isn't a hard sell for Holly to give up Nicole to follow her fantasy woman.

The book didn't have a whole lot of the straight dope on Holly's library work, except for one section in which Holly takes Virago to work with her. When Holly explains that she works in a library that's "full of books" Virago explains that she has libraries in her world, too. And she loves them.

Holly goes about her day doing library things such as helping her friend Alice with story time. Alice has the sexy librarian thing going with "her long blonde hair...piled on top of her head in a sweeping curve, and her cat glasses twinkl[ing] from a beaded chain around her neck...wearing skinny jeans and a vanilla blouse". Virago meanwhile settles into reading in the castle-like library (with "three brick towers and turrets...and stained glass windows colorfully marching along the side of the building"). The description of Virago sitting on the floor reading is quite sensual (I found it even more enticing than the rather gosh-darn explicit sex scene). After being admonished to be quiet ("with the universal gesture of 'sh'") by fellow librarian Alice, Holly finds her knight


seated on the floor, her back against a shelf of books, her legs folded in front of her gracefully, a book propped up on her lap, and her elbows propped on her knees as she carefully curves her body over the book, utterly intent on devouring it. Her brows are furrowed in concentration, and she traces a few lines from the page with a long finger, entranced by what she's reading.

My heart skips a beat as I watch her read that book. She's so obviously engrossed and delighted by what she's finding between the covers...She seems to be devouring information...

As a librarian herself, Holly understands the importance of super-hero librarians in the lives of others, and remembers the one who inspired her as a geeky gay kid in high school - the one who introduced her to her favorite book The Knight and the Rose. Miss T knew that "everyone need[ed] a heroine like them" and suggests a book about a girl named Miranda who becomes a knight, and falls in love with a princess.

The book is a "comfort read" for Holly - the one she turns to when she's had a bad day. And so, when Holly's lover leaves her at the Renaissance Faire, Holly eschews her "to be read" pile and instead her "fingers grasp a familiar and well-worn volume" as she remembers the first time she read it, after a good cry in her high school bathroom.

A good librarian book with two different kinds of libraries A fun read overall.
Posted by YearofBooks at 11:12 AM