The Essential Dykes to Watch Out For - by Alison Bechdel 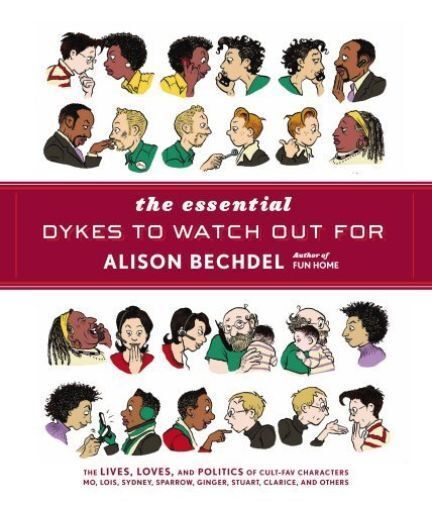 Baltimore County Public Library's #BWellRead challenge for September 2018 was to "read a book you've always meant to read". I wasn't sure how to interpret "always" but I looked back on the list I've been keeping since about the start of this century and decided that a book that's been waiting ten years to be read qualified.

I made several attempts to purchase this at an independent bookstore, which it turns out would have been appropriate since much of the action takes place in such a store. Ultimately, however, I caved and ended up getting this from Amazon. I do offer myself some absolution though as I bought something at each of the independent shops I visited.

Although this reads as a graphic novel it is, in fact, a collection of the Dykes to Watch Out For comic strips. The book includes strips originally published between 1987-2008. While each panel features an independent episode, it reads as a soap opera with characters falling in and out of love, changing careers, becoming parents, and negotiating the evolving political landscape. I had not thought about some of the old political issues that come up in this work for a long time, and likewise was reminded how long some of the stalwarts in Washington have been around making trouble. It was sort of like visiting an old "frenemy".

Despite the fact that the characters in this work are quite well read, it was not until about the midway point of this 390-page book that I found any mention of libraries at all, and it was in a fantasy sequence. Each of three roommates (Ginger, Lois, and Sparrow) imagines what it would be like to live without the other two. Ginger's daydream involves a well organized bookshelf  "in Library of Congress order". I then had to read another 80-ish  pages before a library comes into play again, this time for real. Mo and her paramour Sydney do it "by the book" (so to speak) right there in the HQ 70s in the University Library (the range that includes books on lesbianism). It is no doubt the excitement of this tryst that prompts Mo to apply to library school, something we discover on the very next page! It is at this point that the libraries just keep coming as we follow Mo through her acceptance, taking classes, graduation, and getting her first job - in a post PATRIOT act world.

I am posting this one in honor of National Coming Out Day.