The Geography of Genius - by Eric Weiner 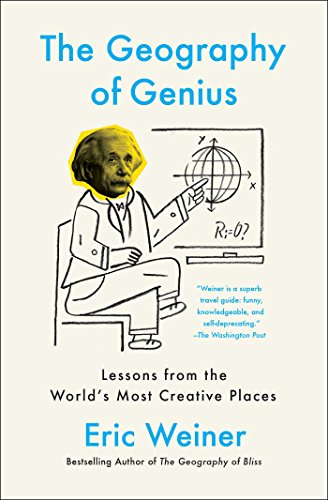 Nine years ago I embarked on a project of reading "Year Of" books. One of the books I read, together with my geographer husband, was Eric Weiner's Geography of Bliss in which the author sought out the world's happiest places. When we discovered that Weiner had written another geography book we downloaded it and listened to it together during our regular drives between Bridgewater and Fairhaven. In The Geography of Genius Weiner visits places that were once hotbeds of creativity, or in the case of Silicon Valley, still are.

Of course libraries are essential elements when discussing genius and Weiner mentions them no fewer than twenty times.

Twice he used the library as a metaphor:


Importantly, Weiner also points out that libraries are not just places for books, but for programs and as gathering centers as well when he sees people queuing for a lecture at the National Library in Edinburgh, Scotland.

Libraries weren't always a public resource. Early libraries were by membership or subscription only. Today public libraries are recognized as the People's University. Block printing during the Song Dynasty (969 to 1276 AD) in Hangzhou China brought information to the masses. "Soon, thousands of titles, on all sorts of topics, were published each year. One library alone, at the Imperial Palace, housed some eighty thousand scrolls."

In Calcutta he discusses colonization with this description of Job Charnock - a seventeenth-century English sea captain, who married an Indian woman.

That might come as a surprise given our image of the British and their attempts to rule India without interacting with India.

Charnock was the exception to those who agreed with Lord Macaulay "a senior official in the Raj, who infamously said that a single shelf of a good European library was worth the whole native literature of India and Arabia."

The same type of European-superiority thinking is evident in Joshua Hammer's work The Bad-Ass Librarians of Timbuktu as well.

Throughout his travels the author sings the praises of several librarians who helped him along the way:
Smart people use libraries.