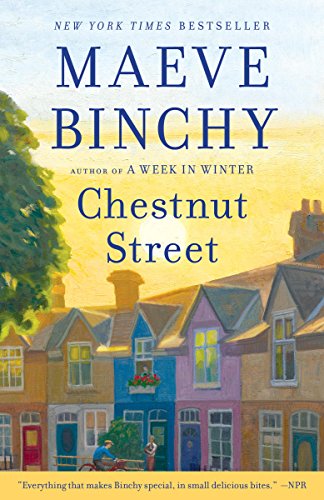 I picked this book from a free book exchange shelf. I was drawn to the title as Chestnut Street is also the name of the street where my beach house is located. Binchy's Chestnut, however, is in Dublin, Ireland rather than on the south coast of Massachusetts.

Like the similarly titled The House on Mango Street by Sandra Cisneros Binchy's book is a series of vignettes. Some of the characters and events overlap, but each chapter can stand on its own. The stories represent different periods of time from the 1950s to the 2000s.

Several of the stories involve library users or library workers.

First up is young Nessa (aka Vanessa) who was told by her sophisticated Aunt Elizabeth that "All that matters is seeing places of elegance, places with high standards". Such places include the Chester Beatty Library. Her aunt also explains that there is no reason for her (Vanessa) to take piano lessons as she can learn to appreciate music by borrowing music CDs from the library.


Usually when I take a book from a free book exchange, I send it back out into the universe of book readers by placing it on another free shelf, or in a Little Free Library. This one, though, I will put in a place of honor on the shelf in my own house on Chestnut Street.